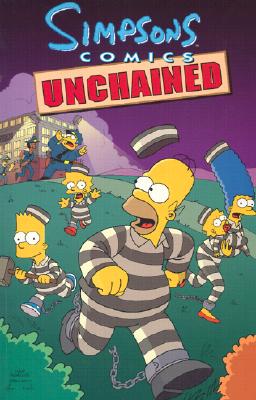 Attention, citizens! Lock your doors and windows! Run for your lives! The Simpsons are busting out the bindings of their biggest and best book yet, and no one is safe from their maniacal comic madness! See Grampa Simpson embark on a new career as El Grampo, a modern day Zorro for the senior set, whose anarchistic shenanigans start to cramp the similarly–inspired protests of his grandson, Bart Simpson (a.k.a. El Barto). Behold the destructive power of censorship as Homer Simpson and the Comic Book Guy fight for their right to free speech and their very lives. Envison a local celebrity, Krusty the Clown, who comes to dinner and refuses to leave. Witness Mr. Burns' power mad scheme to undermine the economy of Springfield by paying his employees in jelly donuts. Observe a town caught in the thrall of an international media sensation, unable to separate themselves from the television chronicle of the life of one man䇯mer Simpson. These stories and many more can barely be contained in the new comic collection...Simpsons Comics Unchained!

Matt Groening, the creator and executive producer of the Emmy® Award-winning series The Simpsons, as well as creator of the cartoon strip "Life in Hell" and the animated FOX television series Futurama, is the man responsible for bringing animation back to primetime and creating an immortal nuclear family. In addition, Groening formed Bongo Comics Group in 1993 and currently serves as publisher of The Simpsons Library of Wisdom, Simpsons Episode Guides, Simpsons Comics, Bart Simpson Comics, Radioactive Man Comics, Simpsons Comics Treasure Trove, the annual Bart Simpson's Treehouse of Horror, Futurama Comics and more than 36 comic compilations, as well as many instant classics including Bart Simpsons Guide to Life, The Simpsons Handbook and The Simpsons Uncensored Family Album.