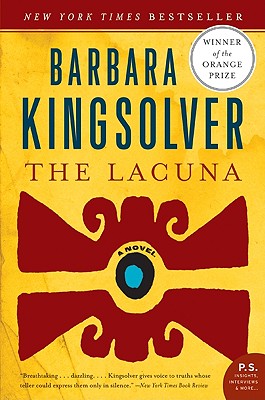 “Moving from a setting in Mexico (in the company of Frida Kahlo, Diego Rivera, and Trotsky) to the 1950s America of Red Scares and McCarthyism, The Lacuna tells the very personal and human story of young novelist Harrison Shepherd. Kingsolver does a masterful job creating a story with both scope and intimacy while also raising potent questions about freedom of expression and belief. Bravo!”
— Sheryl Cotleur, Book Passage, Corte Madera, CA

“Kingsolver's first novel in nine years has a compelling, provocative storyline that takes place between Mexico City and the United States in the period from the 1930s to the 1950s. A young Mexican-American man finds himself caught up in the creative and political household of Diego Rivera and Frida Kahlo. He mixes plaster for the muralist, types letters for Leon Trotsky, and befriends Frida. The Lacuna is a solid example of Kingsolver's expertise in combining politics and fiction. The philosophy of Communism and the innate need for freedom of expression raise their demanding fists in this young man's story, and they won't let the reader go.”
— Dianne Patrick, Snowbound Books, Marquette, MI

In The Lacuna, her first novel in nine years, Barbara Kingsolver, the acclaimed New York Times bestselling author of The Poisonwood Bible and Animal, Vegetable, Miracle: A Year of Food Life, tells the story of Harrison William Shepherd, a man caught between two worlds—an unforgettable protagonist whose search for identity will take readers to the heart of the twentieth century’s most tumultuous events.

Barbara Kingsolver is the author of ten bestselling works of fiction, including the novels Unsheltered, Flight Behavior, The Lacuna, The Poisonwood Bible, Animal Dreams, and The Bean Trees, as well as books of poetry, essays, and creative nonfiction. Her work of narrative nonfiction is the influential bestseller Animal, Vegetable, Miracle: A Year of Food Life. Kingsolver’s work has been translated into more than twenty languages and has earned literary awards and a devoted readership at home and abroad. She was awarded the National Humanities Medal, our country’s highest honor for service through the arts, as well as the Dayton Literary Peace Prize for the body of her work. She lives with her family on a farm in southern Appalachia.

“Rich…impassioned…engrossing…Politics and art dominate the novel, and their overt, unapologetic connection is refreshing.” — Chicago Tribune

“A work that is often close to magic.... Much research underlies this complex weaving...but the work is lofted by lyric prose.” — Denver Post

“Shepherd’s story in Kingsolver’s accomplished literary hands is so seductive, the prose so elegant, the architecture of the novel so imaginative, it becomes hard to peel away from the book” — Pittsburgh Post-Gazette

“A sweeping mural of sensory delights and stimulating ideas about art, government, identity and history…Readers will feel the sting of connection between then and now.” — Seattle Times

“A lavishly gifted writer... Kingsolver [has a] wonderful ear for the quirks of human repartee. The Lacuna is richly spiked with period language... This book grabs at the heartstrings...” — Los Angeles Times

“Breathtaking...dazzling...The Lacuna can be enjoyed sheerly for the music of its passages on nature, archaeology, food and friendship; or for its portraits of real and invented people...But the fuller value...lies in its call to conscience and connection.” — New York Times Book Review

“[Kingsolver] stirs the real with the imagined to produce a breathtakingly ambitious book, bold and rich…hopeful, political and artistic. The Lacuna fills a lacuna with powerfully imagined social history — Kansas City Star