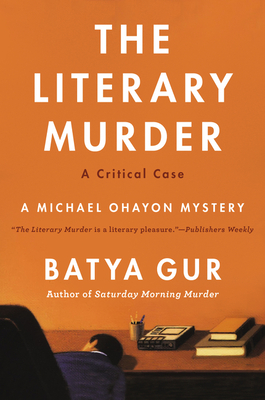 This is book number 2 in the Michael Ohayon Series series.

From award-winning and internationally acclaimed author, Batya Gur, comes this riveting mystery in which a shocking double murder at Israel's top academic institution brings Superintendent Michael Ohayon to the scene to probe the nature of creativity and unravel the mystery.

In investigating the deaths of a professor of literature and his junior colleague, Superintendent Michael Ohayon raises profound ethical questions about the relationship between the artist and his creation, and between the artist and a moral code. It brings him into contact with the academic elite and reveals the social problems and differing perspectives of Israel’s various classes.

Known as “the Israeli Agatha Christie, Batya Gur’s The Literary Murder is a clever, compelling, and suspenseful mystery that will leave readers entertained up until the final, harrowing conclusion.

Batya Gur (1947-2005) lived in Jerusalem, where she was a literary critic for Haaretz, Israel's most prestigious paper. She earned her master's in Hebrew literature at the Hebrew University of Jerusalem, and she also taught literature for nearly twenty years.

&#8220A complex mystery set in an unusual, well-developed milieu with a full cast of characters. Literary Murder is literary multidimensional pleasure.”  — Publishers Weekly

“This is a marvelous book, seductively engaging from beginning to end ... intellectual pursuit is portrayed with vigor and grace.”  — Newsday

“Gur, a professor of literature in Jerusalem, knows academia well, and she uses it as a foil to illustrate the social and cultural tensions that permeate Israeli life. At the same time, she tells a fine detective yarn, keeping her cards well hidden until the end, deftly setting up the reader for twists, turns, and surprises” — Booklist