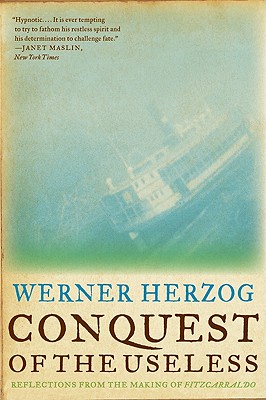 “Hypnotic….It is ever tempting to try to fathom his restless spirit and his determination to challenge fate.”

Werner Herzog (Grizzly Man) is one of the most revered and enigmatic filmmakers of our time, and Fitzcarraldo is one of his most honored and admired films. More than just Herzog’s journal of the making of the monumental, problematical motion picture, which involved, among other things, major cast changes and reshoots, and the hauling (without the use of special effects) of a 360-ton steamship over a mountain , Conquest of the Useless is  a work of art unto itself, an Amazonian fever dream that emerged from the delirium of the jungle. With fascinating observations about crew and players—including Herzog’s lead, the somewhat demented internationally renowned star Klaus Kinski—and breathtaking insights into the filmmaking process that are uniquely Werner Herzog, Conquest of the Useless is an eye-opening look into the mind of a cinematic master.

Werner Herzog grew up in a remote mountain village in Bavaria. He never saw any films, television, or telephones as a child. During high school he worked the nightshift as a welder in a steel factory to produce his first film, in 1961, at the age of nineteen. Since then he has produced, written, and directed more than fifty films, including Aguirre, the Wrath of God; The Enigma of Kaspar Hauser; Rescue Dawn; and Grizzly Man. He lives in Los Angeles, California.

“Hypnotic...Any book by Mr. Herzog...turns his devotees into cryptographers. It is ever tempting to try to fathom his restless spirit and his determination to challenge fate.” — Janet Maslin, New York Times

“Stands alone as a compellingly gonzo piece of reportage. . . . As a read, Conquest flies along—but not because it’s especially plotty. Rather, it gathers its kick from the spectacle of a celebrity director escaping the late–’70s famescape into his own obsessions.” — Time Out New York

“Those who haven’t encountered Herzog on screen will undoubtedly be drawn in by the director’s lyricism, while cinephiles will relish the opportunity to retrace the steps of one on the medium’s masters.” — Publishers Weekly