The Dakota Winters: A Novel (Paperback) 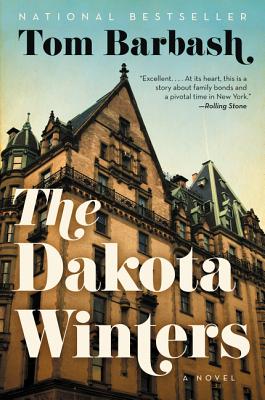 The Dakota Winters: A Novel (Paperback)

“In The Dakota Winters, Barbash delivers a sweeping family saga that transports readers to the New York City of the late ’70s and early ’80s, to Central Park, The Village, the restaurant and club scenes, from The Beatles to The Flying Lizards to your average dysfunctional family living at the Dakota — the Winters. The story follows two conflicting arcs: that of fading father and late-night host Buddy Winter and that of his emerging 23-year-old son Anton. I loved Barbash’s first novel, The Last Good Time, and The Dakota Winters does not disappoint. You’ll want to savor every sentence of this powerful chronicle of the times!”
— Bill Reilly, The River's End Bookstore, Oswego, NY

An evocative and wildly absorbing novel about the Winters, a family living in New York City’s famed Dakota apartment building in the year leading up to John Lennon’s assassination

It’s the fall of 1979 in New York City when twenty-three-year-old Anton Winter, back from the Peace Corps and on the mend from a nasty bout of malaria, returns to his childhood home in the Dakota. Anton’s father, the famous late-night host Buddy Winter, is there to greet him, himself recovering from a breakdown. Before long, Anton is swept up in an effort to reignite Buddy’s stalled career, a mission that takes him from the gritty streets of New York, to the slopes of the Lake Placid Olympics, to the Hollywood Hills, to the blue waters of the Bermuda Triangle, and brings him into close quarters with the likes of Johnny Carson, Ted and Joan Kennedy, and a seagoing John Lennon.

But the more Anton finds himself enmeshed in his father’s professional and spiritual reinvention, the more he questions his own path, and fissures in the Winter family begin to threaten their close bond. By turns hilarious and poignant, The Dakota Winters is a family saga, a page-turning social novel, and a tale of a critical moment in the history of New York City and the country at large.

Tom Barbash is the author of the award-winning novel, The Last Good Chance, which was was awarded the California Book Award, and the short story collection Stay Up With Me, which was a national bestseller and was nominated for the Folio Prize. His nonfiction book, On Top of the World: Cantor Fitzgerald, Howard Lutnick, and 9/11: A Story of Loss and Renewal, was a New York Times bestseller. His stories and articles have been published in Tin House, McSweeney’s, VQR, and other publications, and have been performed on National Public Radio for their Selected Shorts Series. He currently teaches in the MFA program at California College of the Arts. He grew up on the Upper West Side of Manhattan and currently lives in Marin County.

“Excellent…. At its heart, this is a story about family bonds and a pivotal time in New York.” — Rolling Stone

“Arresting…. Barbash has vividly captured the end times feeling of this period in America and has populated his sad and funny tale with a highly engaging mix of real people and fictional characters…. Barbash has sprinkled ‘The Dakota Winters’ with Beatle dust. Lennon is alive in its pages.” — New York Times Book Review

“Set in Manhattan in the late 1970s, this charming coming-of-age tale is sure to be catnip for pop-culture mavens.... Gossipy, nostalgic gold.” — People

“A keen and understated examination of how the vagaries of celebrity life impinge on a father-son relationship.” — Minneapolis Star Tribune

“In this family saga set in 1980 in New York City’s Dakota building, a young man tries to help his father revive his TV career while mingling with famous folks like John Lennon.” — USA Today

“Punctuated by clever dialogue and crisp social critiques, Barbash’s incisive, funny, and poignant portrait of talented people and a city in flux illuminates the risks of celebrity and the struggle to become one’s true self.” — Booklist (starred review)

“A beautiful, evocative novel of family devotion, celebrity, downfall, and survival, framed by the political and cultural upheavals of America on the cusp of a new decade. Irresistibly tender.” — Library Journal

“Suffused with warm memories of punk clubs, the “Miracle on Ice” U.S. Olympic hockey team, young romance, and the A-list residents at the storied Dakota apartments.... Pleasurably endearing for anybody with a soft spot for pop culture, Annie Hall-era Manhattan, and 20-somethingdom at its most freewheeling. — Kirkus Reviews

“The Dakota Winters is deft, funny, touching, and sharply observed, a marvel of tone, and a skillful evocation of a dark passage in the history of New York City, when all the fearful ironies of the world we live in now first came stalking into view.” — Michael Chabon, author of Moonglow

“A crazily charming novel--and a reminder that charm can be a profound literary value. I wanted to begin a new life… with these characters. I wanted to trade worlds with them...A wise and seductive story that feels truer than true, as only the very finest fiction does.” — Walter Kirn, author of Up in the Air

“Thoughtful and entertaining...A thought-provoking time capsule... If you were a fan of TV’s Mad Men—specific to a time and place but universal in its exploration of the themes of identity and human vulnerability—you might very well love this novel as much as I did.” — Wally Lamb, author of I Know This Much Is True