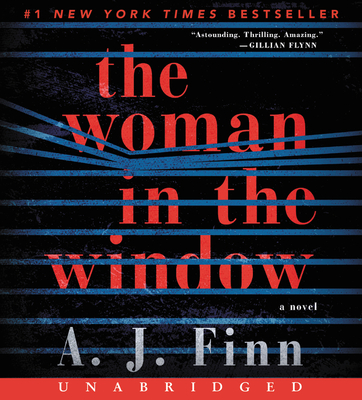 By A. J. Finn, Ann Marie Lee (Read by)
Email or call for price
Out of Print

“The Woman in the Window is being touted as one of the hottest releases of early 2018, and with excellent reason. A modern take on Hitchcock's Rear Window, with many nods to classic noir film, A.J. Finn's debut novel is told through the eyes of a narrator trapped inside her beautiful house by a severe case of agoraphobia and separated from her estranged husband and young daughter. She copes with her condition by spying on her neighbors and living vicariously through their drama, until the night she witnesses what appears to be a murder and finds herself swept up in its wake. Once this story gets rolling, it will bowl you over. Fans of psychological thrillers should take note of this banger of a tale!”
— Whitney Spotts, Schuler Books & Music, Lansing, MI

For readers of Gillian Flynn and Tana French comes one of the decade’s most anticipated debuts, to be published in thirty-six languages around the world and already in development as a major film from Fox: a twisty, powerful Hitchcockian thriller about an agoraphobic woman who believes she witnessed a crime in a neighboring house.

Anna Fox lives alone—a recluse in her New York City home, unable to venture outside. She spends her day drinking wine (maybe too much), watching old movies, recalling happier times . . . and spying on her neighbors.

Then the Russells move into the house across the way: a father, mother, their teenaged son. The perfect family. But when Anna, gazing out her window one night, sees something she shouldn’t, her world begins to crumble?and its shocking secrets are laid bare.

What is real? What is imagined? Who is in danger? Who is in control? In this diabolically gripping thriller, no one—and nothing—is what it seems.

Twisty and powerful, ingenious and moving, The Woman in the Window is a smart, sophisticated novel of psychological suspense that recalls the best of Hitchcock.

A. J. Finn has written for numerous publications, including the Los Angeles Times, the Washington Post, and the Times Literary Supplement (UK). A native of New York, Finn lived in England for ten years before returning to New York City.