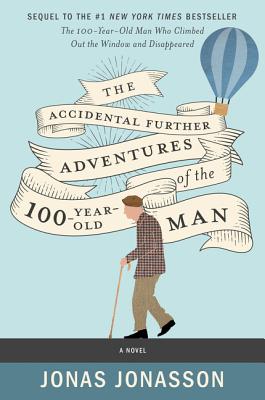 The hysterical, clever, and unforgettable sequel to Jonas Jonasson’s international bestseller The Hundred-Year-Old Man Who Climbed Out of the Window and Disappeared.

He's back. Even older. Even funnier.

It all begins with a hot air balloon trip and three bottles of champagne. Allan and Julius are ready for some spectacular views, but they’re not expecting to land in the sea and be rescued by a North Korean ship, and they could never have imagined that the captain of the ship would be harboring a suitcase full of contraband uranium, on a nuclear weapons mission for Kim Jong-un. Yikes!

Soon Allan and Julius are at the center of a complex diplomatic crisis involving world figures from the Swedish foreign minister to Angela Merkel and President Trump. Needless to say, things are about to get very, very complicated.

Another hilarious, witty, and entertaining novel from bestselling author Jonas Jonasson that will have readers howling out-loud at the escapades and misfortunes of its beloved hundred-year-old hero Allan Karlsson and his irresistible sidekick Julius.

JONAS JONASSON worked as a journalist for the Expressen newspaper for many years. He became a media consultant and later set up a company producing sports and events for Swedish television. He then sold the company and moved abroad to work on his first novel. Today Jonasson is a global phenomenon. His five novels—The 100-Year-Old Man Who Climbed Out the Window and Disappeared, The Girl Who Saved the King of Sweden, Hitman Anders and the Meaning of It All, The Accidental Further Adventures of the Hundred-Year-Old Man and The Hundred-Year-Old Man Who Skipped Out on the Bill and Disappeared—have sold sixteen million copies in forty-six countries. Jonas Jonasson lives on the Swedish island of Gotland in the Baltic Sea.

“Jonasson creates the near impossible with his astute assessments of today’s unstable global political climate and endearingly sweet characters, providing laugh-out-loud moments in a dark time. Reminiscent of Alexander McCall Smith’s The No. 1 Ladies’ Detective Agency with a side order of Forrest Gump.” — Library Journal (starred review)

“A welcome visit from an old friend that’s filled with laugh out-loud hijinx as well as thought- provoking and timely satire on the current state of the world and the perils of power.” — Booklist

“As much ludicrous fun as the first book but with the additional bonus of being set in today’s crazy political world.... Highly recommended.” — Express