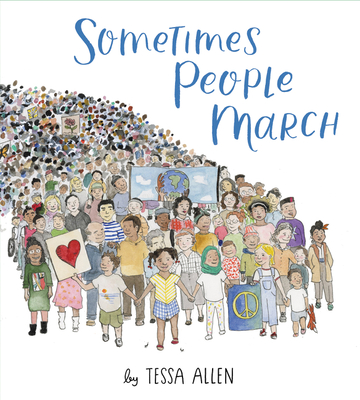 “The perfect book for this moment in time! Sometimes People March is a thoughtful overview of the ways and reasons people march. It eloquently examines this important aspect of free speech in an accessible way that speaks to the heart of movements.”
— Jill Burket Ragase, Blue Manatee Literacy Project Bookstore, Cincinnati, OH

With a spare, inspiring text and gorgeous watercolor illustrations, this is a timeless and important book for activists of all ages. This hardcover picture book is perfect for sharing and for gifting.

Sometimes people march
to resist injustice,
to stand in solidarity,
to inspire hope.

Throughout American history, one thing remains true: no matter how or why people march, they are powerful because they march together.

“Allen presents an accessible introduction to political protest: ‘Marching is something people do together when they want to resist injustice.’ Spare prose informs on the necessity of rallying and communal allyship, with graceful allusions to significant historical events from 1776 to the present.” — Publishers Weekly (starred review)

“A warm, inviting introduction to protests and demonstrations, nicely pitched to the youngest of readers and ideal for starting conversations about current events.”
— Booklist (starred review)