Made with Love: Get hooked with 30 knitting and crochet patterns (Hardcover) 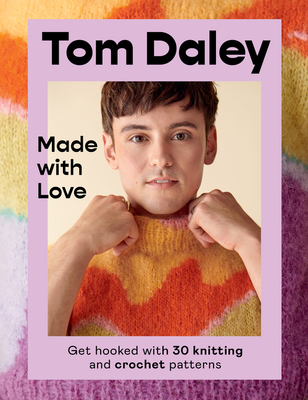 Made with Love: Get hooked with 30 knitting and crochet patterns (Hardcover)

During the Tokyo Olympics, British diver Tom Daley was often spotted calming his nerves with knitting needles in hand. His new favorite hobby, which he picked up during the Covid lockdown, combined with his gold medal performance, won him a new legion of fans. In fact, his Olympic inspired cardigan, made just before he left for Japan, grabbed nearly as many headlines as his win.

In his native England, Daley is beloved as a four-time Olympic medalist, well-known television personality, and activist in the LGBTQ space. In addition, Daley and his husband, the Oscar-winning screenwriter Dustin Lance Black, are the parents of a toddler son, and many of Tom’s projects are adorable toys or clothes for Robbie.

Now Tom has created thirty original projects for this book, sharing his joy of knitting and crocheting as a calming and creative outlet alongside his charming, witty personality. Full color and totally bespoke for this book, these projects run the gamut from toys to clothing for adults and kids to home décor. Full of color, full of joy, and Made with Love™ (the name of Tom’s online store, selling projects, patterns and branded merchandise) this is yarn crafts made very cool.

Tom Daley is the most decorated British diver of all time. Winning his first diving gold at the age of 13, he went on to represent Team GB at the 2008, 2012, 2016 and 2020 Olympic Games. In Tokyo, while fans applauded his gold and bronze medal wins, images of Tom knitting poolside also garnered global attention. Dubbed the ‘Tom Daley effect,’ his love for the craft has helped knitting hit the mainstream and in 2021, Tom launched his own knitting line, Made With Love. A three-time BBC Young Sports Personality of the Year winner and an advocate for LGBTQ+ rights across the world, Tom currently lives in London with his husband and son.