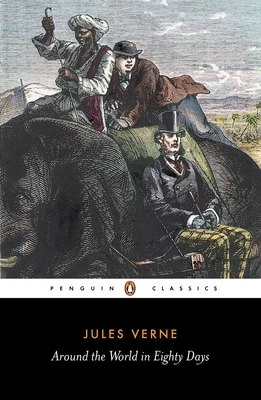 One night in the reform club, Phileas Fogg bets his companions that he can travel across the globe in just eighty days. Breaking the well-established routine of his daily life, he immediately sets off for Dover with his astonished valet Passepartout. Passing through exotic lands and dangerous locations, they seize whatever transportation is at hand - whether train or elephant - overcoming set-backs and always racing against the clock.

In 1863, Jules Verne (1828-1905) published Five Weeks in a Balloon, and struck a new vein in fiction - stories that combined popular science and exploration. He wrote 54 novels in the Extraordinary Voyages series.

Michael Glencross, the translator, has written widely on French literature and culture.

Brian Aldiss is a distinguished Science Fiction writer as well as a poet, essayist, dramatist, SF historian and critic.

“The reason Verne is still read by millions today is simply that he was one of the best storytellers who ever lived.”—Arthur C. Clarke