The Ship of Brides: A Novel (Paperback) 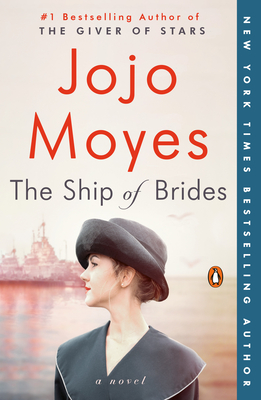 The Ship of Brides: A Novel (Paperback)


Usually Ships in 1-5 Days
From the New York Times bestselling author of The Giver of Stars and Someone Else's Shoes, a post-WWII story of the war brides who crossed the seas by the thousands to face their unknown futures.

1946. World War II has ended and all over the world, young women are beginning to fulfill the promises made to the men they wed in wartime.

In Sydney, Australia, four women join 650 other war brides on an extraordinary voyage to England—aboard HMS Victoria, which still carries not just arms and aircraft but a thousand naval officers. Rules are strictly enforced, from the aircraft carrier’s captain down to the lowliest young deckhand. But the men and the brides will find their lives intertwined despite the Navy’s ironclad sanctions. And for Frances Mackenzie, the complicated young woman whose past comes back to haunt her far from home, the journey will change her life in ways she never could have predicted—forever.
Jojo Moyes is the #1 New York Times bestselling author of The Giver of Stars, Still Me, Paris for One and Other Stories, After You, One Plus One, The Girl You Left Behind, Me Before You, The Last Letter from Your Lover, The Horse Dancer, Silver Bay, The Ship of Brides, and The Peacock Emporium. The Last letter From Your Lover will be released as a major motion picture by Netflix in July. She lives with her husband and three children in Essex, England.
Praise for The Ship of Brides:

“The Ship of Brides is a wonderful read: a tale of fate and destiny that remains utterly unsentimental.”
—Sunday Express (London)

“A scintillating novel of friendship, family and love.”
—Woman & Home

Praise for The Giver of Stars:

“A captivating tale of love, friendship, and self-actualization.”
—People

“The Giver of Stars is a richly rewarding exploration of the depths of friendship, good men willing to stand up to bad and adult love. Moyes celebrates the power of reading in a terrific book that only reinforces that message.”
—USA Today

“Though she made her mark writing contemporary romance, Moyes proves just as adept at historical fiction. . . The Giver of Stars is a celebration of love, but also of reading, of knowledge, of female friendship, of the beauty of our most rural corners and our enduring American grit: the kind of true grit that can be found in the hills of Kentucky and on the pages of this inspiring book.”
—The Washington Post

“Moyes paints an engrossing picture of life in rural America, and it's easy to root for the enterprising librarians.”
—New York Times Book Review

“Bestselling author Jojo Moyes has a unique way of using her prose to make her readers feel great emotions – love, passion, sadness, and grief – and her latest novel The Giver of Stars– does not disappoint in that respect.”
—Parade

“Moyes stays true to her narrative and takes full advantage of the sense of place she gained from repeated trips to the area . . . riveting. A stirring novel sure to please Moyes’ many fans.”
—Minnesota Star Tribune

“An epic journey of friendship, danger, and literacy. . . an ideal read.”
—The Skimm

“With characters so real they feel like dear friends and a compelling storyline, this is a beautiful, special novel. I loved it and didn’t want it to end!”
—Liane Moriarty, #1 New York Times bestselling author of Big Little Lies

“[A] dramatic, sweeping story. . . As well as creating wonderful strong characters, Jojo Moyes has an incredible eye for historical detail — I really felt as though I was riding over those Kentucky mountains with those women."
—Sophie Kinsella for Bustle

“Timeless, Jojo Moyes' greatest work yet, and one of the most exquisitely-written—and absolutely compulsory—novels about women ever told.”
—Lisa Taddeo, #1 New York Times bestselling author of Three Women

“Epic in scope and fiercely feminist. . . an unforgettable story.”
—PopSugar

“Inspired by the history of the actual Pack Horse Librarians, Moyes depicts the courage and resourcefulness of these women in loving detail. The Giver of Stars is a tribute not just to the brave women who brought the light of knowledge in dark times, but also to the rejuvenating bond of women’s friendship.”
—The Associated Press

“Moyes brings an often forgotten slice of history to life. . . the true power of the story is in the bonds between the women of the library. . . A love letter to the power of books and friendship.”
—Kirkus Reviews (starred)

“[A] homage to the power of reading and the strength of community. . . A must-read for women's fiction.”
—Booklist (starred)

“An adventure story grounded in female competence and mutual support, and an obvious affection for the popular literature of the early 20th century, give this Depression-era novel plenty of appeal. . . There’s plenty of drama, but the reader’s lasting impression is one of love.”
—Publishers Weekly

“Rich in history, with well-developed characters and a strong sense of place, this book will fit well in any library’s fiction collection. For fans of Sara Gruen’s Water for Elephants or Catherine Marshall’s Christy.”
—Library Journal (starred)

Praise for Still Me:

“Still Me offers a warm conclusion to the Me Before You trilogy. . . resulting in the best entry in the trilogy yet. . . Moyes has crafted a clear-eyed tale of self-discovery and the sacrifice required to live a life honestly in pursuit of the things you love. [It will] keep you sighing with delight to the very last page. A.”
—Entertainment Weekly

“Jojo's work never fails to bring a smile to my face with her honesty, humour and empathy about what it is to be human—[Still Me is] a must read!”
—Emilia Clarke

“While the series may have started off as a romance, Jojo Moyes has turned Louisa Clark's story into one about learning to be, and to love, yourself.”
—Bustle

“You sobbed through Me Before You. You sped through After You. And now, Lou is back in Still Me. . . don’t miss this funny, romantic third installment.”
—HelloGiggles


Praise for After You:

"Jojo Moyes has a hit with After You.”
—USA Today

“Think Elizabeth Bennet after Darcy’s eventual death; Alice after Gertrude; Wilbur after Charlotte. The 'aftermath' is a subject most writers understandably avoid, but Moyes has tackled it and given readers an affecting, even entertaining female adventure tale about a broken heroine who ultimately rouses herself and falls in love again, this time with the possibilities in her own future..”
—Maureen Corrigan, Fresh Air, NPR

“The genius of Moyes . . . [is that she] peers deftly into class issues, social mores, and complicated relationships that raise as many questions as they answer. And yet there is always resolution. It’s not always easy, it’s not always perfect, it’s sometimes messy and not completely satisfying. But sometimes it is.”
—Bobbi Dumas, NPR.org

“Expect tears and belly laughs from Me Before You’s much anticipated sequel.”
—Cosmopolitan

“Moyes is at her most charming here, writing with a sense of humorous affection about family dynamics among working-class Brits. . . a Maeve Binchy for the 21st century.”
—Kirkus Reviews

“Like its predecessor [Me Before You], After You is a comic and breezy novel that also tackles bigger, more difficult subjects, in this case grief and moving on. . . . We all lose what we love at some point, but in her poignant, funny way, Moyes reminds us that even if it’s not always happy, there is an ever after.”
—Miami Herald

“Once again, Moyes delivers a heart-wrenching and relatable book about love and loss that will stay with you long after you’ve finished.”
—InStyle.com

“Moyes wisely knows that life-changing events don’t always change our lives for the better. . . . After You may not be the sequel you expect, but it is the sequel you needed.”
—Entertainment Weekly

“After You is an immersive experience, inviting readers back into the homes of the characters they fell in love with in Me Before You. They’ll experience the mourning that follows a devastating loss, and the glimmers of hope that propel the brokenhearted forward.”
—BookPage

“[After You] left me thrilled by the possibilities of fiction to entertain and inform, and astounded by [Moyes’s] deep well of talent and imagination.”
—Bask magazine

“A hilarious, heartbreaking, riveting novel . . . I will stake my reputation on this book.”
—Anne Lamott, People

“When I finished this novel, I didn’t want to review it: I wanted to reread it. . . . An affair to remember.”
—The New York Times Book Review

“An unlikely love story . . . To be devoured like candy, between tears.”
—O, The Oprah Magazine

“Masterful . . . a heartbreaker in the best sense . . . Me Before You is achingly hard to read at moments, and yet such a joy.”
—New York Daily News