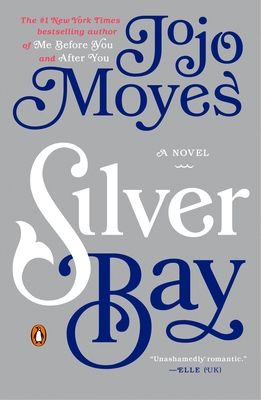 
Backordered
From the New York Times bestselling author of The Giver of Stars, in an earlier work available in the U.S. for the first time, a surprising and moving romance set in an old-fashioned seaside town on the verge of unwelcome change.

Liza McCullen will never fully escape her past. But the unspoiled beaches and tight-knit community of Silver Bay offer the freedom and safety she craves—if not for herself, then for her young daughter, Hannah. That is, until Mike Dormer arrives as a guest in her aunt’s hotel.

The mild-mannered Englishman with his too-smart clothes and distracting eyes could destroy everything Liza has worked so hard to protect: not only the family business and the bay that harbors her beloved whales, but also her conviction that she will never love—never deserve to love—again.

For his part, Mike Dormer is expecting just another business deal—an easy job kick-starting a resort in a small seaside town ripe for development. But he finds that he doesn’t quite know what to make of the eccentric inhabitants of the ramshackle Silver Bay Hotel, especially not enigmatic Liza McCullen, and their claim to the surrounding waters. As the development begins to take on a momentum of its own, Mike’s and Liza’s worlds collide in this hugely affecting and irresistible tale full of Jojo Moyes’s signature humor and generosity.
Jojo Moyes is the #1 New York Times bestselling author of The Giver of Stars, Still Me, Paris for One and Other Stories, After You, One Plus One, The Girl You Left Behind, Me Before You, The Last Letter from Your Lover, The Horse Dancer, Silver Bay, The Ship of Brides, and The Peacock Emporium. The Last letter From Your Lover will be released as a major motion picture by Netflix in July. She lives with her husband and three children in Essex, England.
Praise for Silver Bay:

"Moyes is a tremendously gifted storyteller." --Paula McLain, author of The Paris Wife

"Touching and impossible to put down." --Daily Express (London)

Praise for Paris for One and Other Stories:

“Moyes is in fine, cheeky form in this collection of short fiction, deploying the wit and charm that animates Me Before You and her other popular novels. The title novella offers a vicarious jolt of Parisian romance, while shorter stories deliver pithy insights into the joys and woes of marriage, ending with delightful twists.” --People

“An old-fashioned, feel-good love story. . .  ["Paris for One" is] as light as a French pastry. It will make you smile and even, maybe, sigh. It’s as if Moyes has booked a vacation and is taking us along. To Paris. Amour! . . . Think of these short fictions as palate cleansers after the sweet, tasty Parisian treat Moyes so deliciously serves up.” –USA Today

“Paris for One and Other Stories. . . [is]  dreamy escapism, a book you can curl up with and easily finish over a weekend, with or without a glass of wine.” –Miami Herald

"[A] charming novella. . . [and] a collection of short stories rounds out the work and adds up to an engaging way to spend fall's first chilly afternoon.”—Good Housekeeping

“These stories are a treat—quick, short nibbles of Moyes’ character genius, storytelling charisma, and writing grace, plus a new, intriguing format for the author, with the occasional surprising twist.” --Kirkus Reviews

"Vibrant. . .Bold, humorous and genuine, the stories in this collection are classic Moyes." —Publishers Weekly

Praise for After You:

"Jojo Moyes has a hit with After You.”—USA Today

“Think Elizabeth Bennet after Darcy’s eventual death; Alice after Gertrude; Wilbur after Charlotte. The 'aftermath' is a subject most writers understandably avoid, but Moyes has tackled it and given readers an affecting, even entertaining female adventure tale about a broken heroine who ultimately rouses herself and falls in love again, this time with the possibilities in her own future..” —Maureen Corrigan, Fresh Air, NPR

“The genius of Moyes . . . [is that she] peers deftly into class issues, social mores, and complicated relationships that raise as many questions as they answer. And yet there is always resolution. It’s not always easy, it’s not always perfect, it’s sometimes messy and not completely satisfying. But sometimes it is.” —Bobbi Dumas, NPR.org

“Expect tears and belly laughs from Me Before You’s much anticipated sequel.” —Cosmopolitan

“Moyes is at her most charming here, writing with a sense of humorous affection about family dynamics among working-class Brits. . . a Maeve Binchy for the 21st century.” —Kirkus Reviews

“Like its predecessor [Me Before You], After You is a comic and breezy novel that also tackles bigger, more difficult subjects, in this case grief and moving on. . . . We all lose what we love at some point, but in her poignant, funny way, Moyes reminds us that even if it’s not always happy, there is an ever after.” —Miami Herald

“Once again, Moyes delivers a heart-wrenching and relatable book about love and loss that will stay with you long after you’ve finished.” —InStyle.com

“Moyes wisely knows that life-changing events don’t always change our lives for the better. . . . After You may not be the sequel you expect, but it is the sequel you needed.” —Entertainment Weekly

“After You is an immersive experience, inviting readers back into the homes of the characters they fell in love with in Me Before You. They’ll experience the mourning that follows a devastating loss, and the glimmers of hope that propel the brokenhearted forward.” —BookPage

“[After You] left me thrilled by the possibilities of fiction to entertain and inform, and astounded by [Moyes’s] deep well of talent and imagination.” —Baskmagazine

“A hilarious, heartbreaking, riveting novel . . . I will stake my reputation on this book.” —Anne Lamott, People

“When I finished this novel, I didn’t want to review it: I wanted to reread it. . . . An affair to remember.” —The New York Times Book Review

“An unlikely love story . . . To be devoured like candy, between tears.” —O, The Oprah Magazine

“Masterful . . . a heartbreaker in the best sense . . . Me Before You is achingly hard to read at moments, and yet such a joy.” —New York Daily News

Praise for One Plus One:

“Safety advisory: If you’re planning to read Jojo Moyes’s One Plus One on your summer vacation, slather on plenty of SPF 50. Once you start the book, you probably won’t look up again until you’re the last one left on the beach. . . . [A] wonderful new novel.” —The Washington Post

“Jojo Moyes’ new novel One Plus One adds up to a delightful summer read, where the whole is greater than the sum of its charming parts. . . . Moyes’ observations on modern life are dryly hilarious. . . . You don’t need to be a math whiz to figure out this book is one worth adding to your summer reading list.” —USA Today(four stars)

“Fans of the 2006 summer sleeper hit Little Miss Sunshine will find a lot to love in British author Jojo Moyes’ latest, about a madcap road trip that’s packed to the boot with familial drama, class clashes, and romance.” —Entertainment Weekly(A-)

“No need to worry where this road trip is headed. Just sit back, roll down your window and enjoy being a passenger.” —Cleveland Plain Dealer