One Plus One: A Novel (Paperback) 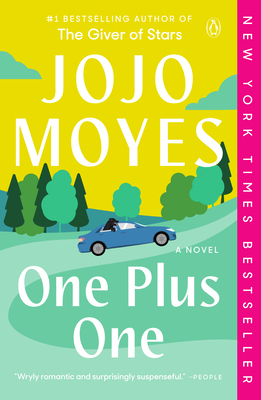 One Plus One: A Novel (Paperback)

“Jess is a single mom working two jobs to support her kids -- Nicky, her goth-like teenage stepson, and Tanzie, her math whiz daughter - who are both struggling to find their way in the world. Ed is a tech millionaire facing charges of insider trading, whose vacation home Jess happens to clean. A once-in-a-lifetime opportunity for Tanzie throws this unlikely group together, sending them on a hellish, hilarious road trip littered with mishaps, misunderstandings, and moments of clarity. The bestselling author of Me Before You offers another unforgettable tale reminding readers that families and love stories both come in all shapes and sizes.”
— Anderson McKean, Page & Palette, Fairhope, AL

One single mom. One chaotic family. One quirky stranger. One irresistible love story from the #1 New York Times bestselling author of The Giver of Stars and the forthcoming Someone Else's Shoes

Suppose your life sucks. A lot. Your husband has done a vanishing act, your teenage stepson is being bullied, and your math whiz daughter has a once-in-a-lifetime opportunity that you can’t afford to pay for. That’s Jess’s life in a nutshell—until an unexpected knight in shining armor offers to rescue them. Only Jess’s knight turns out to be Geeky Ed, the obnoxious tech millionaire whose vacation home she happens to clean. But Ed has big problems of his own, and driving the dysfunctional family to the Math Olympiad feels like his first unselfish act in ages . . . maybe ever.

One Plus One is Jojo Moyes at her astounding best. You’ll laugh, you’ll weep, and when you flip the last page, you’ll want to start all over again.
Jojo Moyes is the #1 New York Times bestselling author of The Giver of Stars, Still Me, Paris for One and Other Stories, After You, One Plus One, The Girl You Left Behind, Me Before You, The Last Letter from Your Lover, The Horse Dancer, Silver Bay, The Ship of Brides, and The Peacock Emporium. The Last letter From Your Lover will be released as a major motion picture by Netflix in July. She lives with her husband and three children in Essex, England.
Praise for ONE PLUS ONE:

“Safety advisory: If you’re planning to read Jojo Moyes’s One Plus One on your summer vacation, slather on plenty of SPF 50. Once you start the book, you probably won’t look up again until you’re the last one left on the beach…[a] wonderful new novel.”—The Washington Post

“Jojo Moyes’ new novel One Plus One adds up to a delightful summer read, where the whole is greater than the sum of its charming parts…Moyes’ observations on modern life are dryly hilarious…You don’t need to be a math whiz to figure out this book is one worth adding to your summer reading list.” —USA Today (4 stars)

“Fans of the 2006 summer sleeper hit Little Miss Sunshine will find a lot to love in British author Jojo Moyes’ latest, about a madcap road trip that’s packed to the boot with familial drama, class clashes, and romance…In Moyes’ deft hands, even a bout of kebab-induced food poisoning is somehow charming. You’ll be rooting for this ragtag group of strivers until the very last page.” —Entertainment Weekly (A-)

“The delightful, comic ONE PLUS ONE is as likable a book as you will come across this summer, light and funny…sharply drawn characters, genuinely amusing scenarios and a compelling warmth for all of these endearing misfits (even Norman).” —Miami Herald

“An irresistible mix of romance and humor”—Dallas Morning News

“No need to worry where this road trip is headed. Just sit back, roll down your window and enjoy being a passenger.” —Cleveland Plain Dealer

“Moyes has a remarkable gift for creating balanced, deep characters who struggle to find their own way. Filled with humor, and insight... she has written an emotional, rich, and satisfying novel. Highly recommended.” Library Journal (starred review)

“One Plus One equals one fine novel.... Bravo to Moyes for delivering characters in a story readers will truly care about. Is that Hollywood calling?”—Booklist

“There’s never anything predictable about stubbornly optimist and protective Jess and her oddball kids, or the distracted Ed and his disjointed work-family relationships. It’s exactly that quality that makes this offbeat journey so satisfying, and Moyes’s irrepressible flaws-and-all characters so memorable.”—Publishers Weekly

Bustle.com included ONE PLUS ONE in their list of “8 Books to Read in July”: “With surefire prose and a likeable protagonist, Moyes captures the comic charms of single motherhood and middle-aged dating in this humor-filled, haphazard love story…far from simple or unexpected. Serious beach read potential here, friends.” —Bustle.com