The Next Great Jane (Paperback) 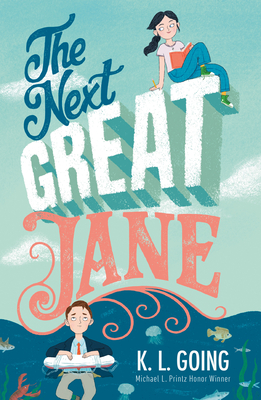 The Next Great Jane (Paperback)


Usually Ships in 1-5 Days
From award-winning author K. L. Going comes a happily-ever-after story of a girl who discovers the true secret to all good writing--through an unlikely friendship, some well-intentioned matchmaking, and little bit of science.

Jane Brannen wants nothing more than to become a famous author like Jane Austen--she just needs to figure out the key to literary success! Her chance to uncover the secret arrives when bestselling author J. E. Fairfax visits her tiny town of Whickett Harbor. Unfortunately, a hurricane rolls in and Jane gets stuck with the author's snobbish son, Devon, instead. But when the skies clear, Jane realizes the wind has blown in something worse than annoying boys: Her mother, Susan, and Susan's new fiancé, Erik, have flown all the way from Hollywood to file for custody and bring Jane back to California. Now she needs to find a mate for her marine biologist father and figure out what's truly important about Whickett Harbor, so she can prove to her mother that this is where she's meant to stay.

K. L. GOING is the award-winning author of multiple books for children and teens. She received a Michael Printz Honor for her teen novel, Fat Kid Rules the World, which was made into a feature film. Her beloved middle-grade novel, The Libera­tion of Gabriel King, was an IRA Notable Book for a Global Society, a CBC Children’s Choice, was nominated for eleven state awards, and is taught in classrooms around the world. Her books have been Booksense picks, Scholastic Book Club choices, Junior Library Guild selec­tions, and have been published worldwide. She currently writes and teaches Language Arts and writing to seventh and eighth graders at a Montessori school, and lives in New York with her family.

* "Fans of Going will love her latest book, and new fans will emerge with a new favorite. Going has created another original and captivating story by weaving engaging characters in an ordinary setting who do incredible and impossible things. An inspirational must-have for every library."—School Library Journal, starred review

* "Readers will be deeply invested in [Jane's] story and well-being and there is a plenty of action that will keep them hooked. This is a book you will end up reading in a day or two because you’ll simply have to see how the story plays out!"—School Library Connection, starred review

“Going succeeds with witty banter and young small-town characters that are both sophisticated and accessible. . . . This humorous tale is led by a young writer who is, like Jane Austen, quite determined.”—Kirkus Reviews

"Lively romantic comedy with timely discussions of natural science and climate change, as well as advice on what it takes to become a successful author."—Publishers Weekly