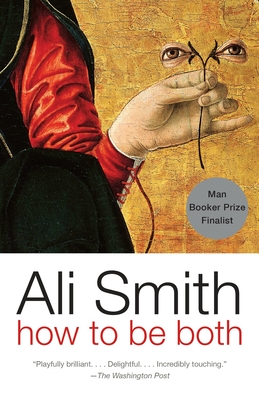 "Cements Smith’s reputation as one of the finest and most innovative of our contemporary writers. By some divine alchemy, she is both funny and moving; she combines intellectual rigor with whimsy" —The Los Angeles Review of Books

How to be both is a fast-moving genre-bending conversation between forms, times, truths and fictions. There’s a Renaissance artist of the 1460s. There’s the child of a child of the 1960s. Two tales of love and injustice twist into a singular yarn where time gets timeless, structural gets playful, knowing gets mysterious, fictional gets real—and all life’s givens get given a second chance. Passionate, compassionate, vitally inventive and scrupulously playful, Ali Smith’s novels are like nothing else.

ALI SMITH is the author of many works of fiction, including, most recently, Summer, Spring, Winter, Autumn, Public Library and Other Stories, and How to Be Both, which won the Baileys Women's Prize for Fiction, the Goldsmiths Prize, and the Costa Novel of the Year Award. Her work has been shortlisted four times for the Booker Prize. Most recently, she won the George Orwell Prize for Fiction for Summer. Born in Inverness, Scotland, she lives in Cambridge, England.

A Best Book of the Year: NPR, Financial Times

“[A] sly and shimmering double helix of a novel.” —The New York Times Book Review

“Joyful. . . . Moving. . . .  Encompasses wonderful mothers, unconventional love and friendship, time, mortality, gender, the consolations of art and so much else.” —NPR

“A mystery to be marveled at. . . . Smith is endlessly artful, creating a work that feels infinite in its scope and intimate at the same time.” —The Atlantic

“Ali Smith is a genius. . . . [How to be both] cements Smith’s reputation as one of the finest and most innovative of our contemporary writers. By some divine alchemy, she is both funny and moving; she combines intellectual rigor with whimsy.” —The Los Angeles Review of Books

“Captivating. . . . How to be both indeed works both ways, demonstrating not only the power of art itself but also the mastery of Smith’s prose.” —San Francisco Chronicle

“A synthesis of questions long contemplated by an extraordinarily thoughtful author, who succeeds quite well in implanting those questions into well-drawn, memorable people.” —The New York Times

“Deft and mischievous, a novel of ideas that folds back on itself like the most playful sort of arabesque.” —Los Angeles Times

“Ali Smith’s signature themes—of the fluidity of identity and gender, appearance and perception—are here in profusion, as is her joyful command of language, from lofty rhetoric to earthy pun.” —Minneapolis Star Tribune

“Ali Smith is a master storyteller, and How to be both is a charming and erudite novel that can quite literally make us rethink the way we read.” —The Philadelphia Inquirer

“An entirely delightful and moving story. . . . When you reach the end of this playful and wise novel, you want to turn to the beginning and read it again to piece together its mysteries and keep both halves simultaneously in mind.” —The Dallas Morning News

“A wonderfully slippery, postmodern examination of the perception, gender, loss and the lasting power of art. . . . The sort of book you could happily read a second time and uncover overlooked truths. In art as finely crafted as this, there’s always more to see, if you look.” —The Miami Herald

“Boundless. . . . Exhilarating. . . . Smith’s concerns—in subject matter and form—are profound and encompassing, and it is beautiful to watch her books defy pinning down.” —Portland Oregonian

“An inventive and intriguing look into the world of art, love, choices, and the duality of the human existence. . . . Even though Smith is writing two very different stories from two different eras, she does a masterful job of weaving connecting threads between the two.” —Milwaukee Journal Sentinel

“Wildly inventive. . . . The narrative voice makes the double-take cohesive, as both are lyrical and fresh. . . . I absolutely adored this book.” —Laura Creste, Bustle

“Smith’s talent shines brightest in her tender depiction of the emotions that, like the underpaintings in a fresco, remain hidden but have a powerful impact.” —BookPage