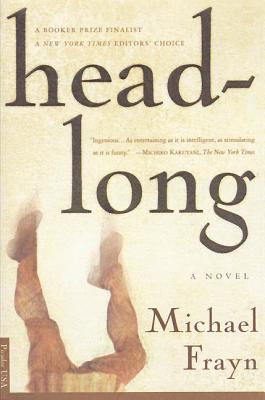 An unlikely con man wagers wife, wealth, and sanity in pursuit of an elusive Old Master.

Invited to dinner by the boorish local landowner, Martin Clay, an easily distracted philosopher, and his art-historian wife are asked to assess three dusty paintings blocking the draught from the chimney. But hiding beneath the soot is nothing less-Martin believes-than a lost work by Bruegel. So begins a hilarious trail of lies and concealments, desperate schemes and soaring hopes as Martin, betting all that he owns and much that he doesn't, embarks on a quest to prove his hunch, win his wife over, and separate the painting from its owner.

In Headlong, Michael Frayn, "the master of what is seriously funny" (Anthony Burgess), offers a procession of superbly realized characters, from the country squire gone to seed to his giddy, oversexed young wife. All are burdened by human muddle and human cravings; all are searching for a moral compass as they grapple with greed, folly, and desire. And at the heart of the clamor is Breugel's vision, its dark tones warning of the real risks of temptation and obsession.

With this new novel, Michael Frayn has given us entertainment of the highest order. Supremely wise and wickedly funny, Headlong elevates Frayn into the front rank of contemporary novelists.

Michael Frayn was born in London in 1933 and began his career as a journalist on the Guardian and the Observer. He has written seventeen plays, including Noises Off, Copenhagen, and Democracy, translated Chekhov's last four plays, and adapted his first as Wild Honey. His screenplays include Clockwise, starring John Cleese, and among his eleven novels are The Tin Men, Towards the End of the Morning, Headlong, Spies, and Skios. Collections of articles include Collected Columns, Stage Directions, and Travels with a Typewriter. He has also published two philosophical works, Constructions and The Human Touch, and a memoir, My Father's Fortune. His most recent publications are three collections of short entertainments, Matchbox Theatre, Pocket Playhouse, and Magic Mobile. He is married to the writer Claire Tomalin.

“Rueful and amusing . . . Frayn is that rare writer who succeeds as both a novelist and a dramatist.” —Randy Cohen, The New York Times Book Review

“Finely wrought and highly comical . . . a perfect introduction to a writer who likes to pull the rug out from under your feet while offering you the most seductive of smiles.” —Michael Upchurch, Seattle Times

“Exceedingly funny, both in event and in intellectual high jinx.” —Katherine A. Powers, The Boston Sunday Globe

“Frayn isn't stingy, even here, with the laughs, gleefully pricking holes in the overconfidence of academic art criticism. But just below the sugar powder you bite into his tough-minded essay on how history and individual human folly combine and conspire to manufacture art's 'message.'” —Judith Dunford, Los Angeles Times Book Review

“Delightful...this novel, deadpan hilarious and wonderfully written, is as effective a work of historical reconstruction as it is a comedy.” —David Walton, Philadelphia Inquirer

“Headlong offers an enthralling and refreshingly grown-up take on the alarming speed with which our morals shift to accommodate our desires, and on the lofty and low ways in which the great art of the past continues to affect us.” —Elle