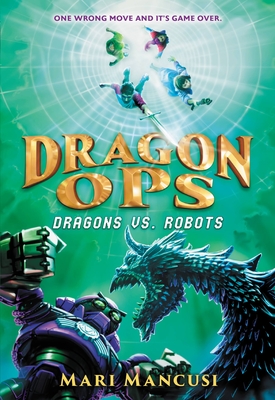 In this sci-fi adventure, the beloved author of Dragon Ops takes readers on a thrilling and heart-pounding journey through a high-stakes video game world.

Now safely back at home, Ian and Lilli are free to return to normal life. Except there's a major problem: Ian keeps seeing the big bad boss dragon Atreus everywhere, and he can't tell whether it's real or in his imagination. So the internet is no longer an option. That's right. Ian, king of online gaming, is out on the soccer court instead. When Atreus shows up . . . everywhere, he knows he needs his sister. But he's legally obligated to never say Dra-er, the name of the game, so how is he supposed to ask for help?

When Ian and Lilli finally sign back online, it's clear that Atreus has truly been released on the open web—and even worse, Ikumi has been kidnapped and imprisoned in a video game. It's back into virtual reality, but this time it's to Mech Ops, a futuristic world of zombies and evil robots—and the game's not even finished.

Will Ian and Lilli have what it takes to jump through unfinished levels undetected? Or will they get booted . . . and even worse, are there do-overs in VR that isn't even built yet?

Mari Mancusi always wanted a dragon as a pet. Unfortunately, the fire insurance premiums proved a bit too large and her house a bit too small, so she chose to write about them instead. As a former Emmy Award-winning TV news producer, she now works as a full-time author, having published over two dozen books for kids, teens, and adults. When not writing, Mari enjoys traveling, cosplay, watching cheesy (and scary) horror movies, and playing video games. A graduate of Boston University, she lives in Austin, Texas, with her husband, Jacob, daughter, Avalon, and their two dogs.

Praise for Dragon Ops:
"Even reluctant readers are likely to find something to keep them engaged. . . . A fun, fast-paced read for video game fans, adventurers, and fantasy readers. Highly recommended."—School Library Journal

"With this adventure, Mancusi (Geeks and the Holy Grail) employs common gaming tropes, interweaving fantasy and mundane elements to create a world that feels familiar and yet enjoyably dangerous. The concepts--rogue AIs, theme parks gone haywire--may be well visited, but Mancusi successfully delivers a sense of urgency to her entertaining tale."—Publishers Weekly