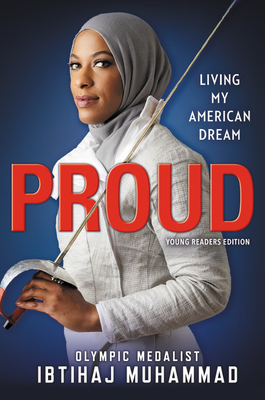 At the 2016 Olympic Games, Ibtihaj Muhammad smashed barriers as the first American to compete wearing hijab, and she made history as the first Muslim American woman to win a medal. But before she was an Olympian, activist, and entrepreneur, Ibtihaj was a young outsider trying to find her place.

Growing up in suburban New Jersey, Ibtihaj was often the only African American Muslim student in her class. When she discovered and fell in love with fencing, a sport most popular with affluent young white people, she stood out even more. Rivals and teammates often pointed out Ibtihaj's differences, telling her she would never succeed. Yet she powered on, rising above bigotry and other obstacles on the path to pursue her dream.

Ibtihaj's inspiring journey from humble beginnings to the international stage is told in her own words and enhanced with helpful advice and never-before-published photographs. Proud is an all-American tale of faith, family, hard work, and self-reliance.
Ibtihaj Muhammad is a New York Times bestselling author, fencer, and the first Muslim American woman in hijab to compete for the United States in the Olympic Games. She is also the first female Muslim American to medal at the Olympic Games, winning bronze in the women's saber team event. Named one of Time magazine's 100 Most Influential People in the world, she serves as a sports ambassador for the US State Department, cofounded Athletes for Impact and her clothing company Louella, and inspired the first hijabi Barbie in her likeness. Ibtihaj invites you to visit her online at ibtihajmuhammad.com.
Praise for Proud (Young Readers Edition):A New York Public Library Best Book of 2018
"Engaging...Muhammad's ability to face down multiple challenges will doubtless be inspiring to young readers."—The Washington Post

* "Readers who are already fans of [Ibtihaj] Muhammad will love her even more, and all readers will gain much inspiration from this heartfelt memoir of a true American hero. Like Muhammad herself, this book is a timely gift to us all."—Kirkus Reviews, starred review

* "eye-opening...[Ibtihaj] Muhammad's story is an inspiring one that will encourage readers to question what it means to be American."—Booklist, starred review

* "Fencer and Olympic medalist Muhammad pens an eminently readable account of her childhood through her win at the 2016 Rio Olympics in this must-have memoir."—School Library Journal, starred review