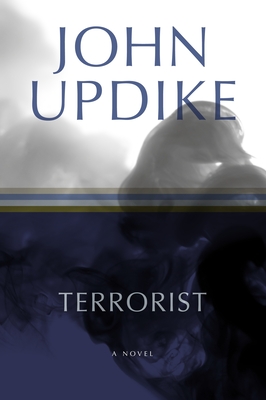 The terrorist of John Updike’s title is eighteen-year-old Ahmad Ashmawy Mulloy, the son of an Irish American mother and an Egyptian father who disappeared when he was three. Devoted to Allah and to the Qur’an as expounded by the imam of his neighborhood mosque, Ahmad feels his faith threatened by the materialistic, hedonistic society he sees around him in the slumping New Jersey factory town of New Prospect. Neither Jack Levy, his life-weary guidance counselor at Central High, nor Joryleen Grant, his seductive black classmate, succeeds in diverting Ahmad from what the Qur’an calls the Straight Path. Now driving a truck for a local Lebanese furniture store—a job arranged through his imam—Ahmad thinks he has discovered God’s purpose for him. But to quote the Qur’an: Of those who plot, God is the best.

John Updike was born in Shillington, Pennsylvania, in 1932. He graduated from Harvard College in 1954 and spent a year in Oxford, England, at the Ruskin School of Drawing and Fine Art. From 1955 to 1957 he was a member of the staff of The New Yorker. His novels have won the Pulitzer Prize, the National Book Award, the National Book Critics Circle Award, the Rosenthal Foundation Award, and the William Dean Howells Medal. In 2007 he received the Gold Medal for Fiction from the American Academy of Arts and Letters. John Updike died in January 2009.

“Terrorist leaves the reader ripping through the book to its finale, desperate to find out what happens. . . . [A] compelling and surprising ride.”—USA Today

“A chilling tale that is perhaps the most essential novel to emerge from September 11.”—People (Critic’s Choice)

“Riveting . . . emotionally daring . . . Updike’s ability to get inside the mind of his Ahmad . . . is what renders the novel credible and sometimes wrenching in its authenticity.”—The Boston Globe