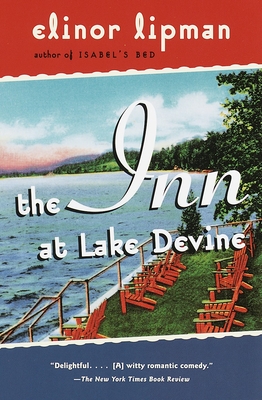 This "tale of delicious revenge" (USA Today) is also "a punchy little comedy of manners.... Think Jane Austen in the Catskills" (Chicago Tribune).

It's 1962 and all across America barriers are collapsing. But when Natalie Marx's mother inquires about summer accommodations in Vermont, she gets the following reply: The Inn at Lake Devine is a family-owned resort, which has been in continuous operation since 1922. Our guests who feel most comfortable here, and return year after year, are Gentiles. For twelve-year-old Natalie, who has a stubborn sense of justice, the words are not a rebuff but an infuriating, irresistible challenge.

In this beguiling novel, Elinor Lipman charts her heroine's fixation with a small bastion of genteel anti-Semitism, a fixation that will have wildly unexpected consequences on her romantic life. As Natalie tries to enter the world that has excluded her—and succeeds through the sheerest of accidents—The Inn at Lake Devine becomes a delightful and provocative romantic comedy full of sparkling social mischief.

Elinor Lipman is the author of numerous novels, including On Turpentine Lane, The View from Penthouse B, The Inn at Lake Devine, The Pursuit of Alice Thrift, and Then She Found Me (a 2008 major motion picture written, directed and starring Helen Hunt); a collection of stories, Into Love and Out Again; an essay collection, I Can’t Complain: (All Too) Personal Essays; and Tweet Land of Liberty: Irreverent Rhymes from the Political Circus. She has been called “the diva of dialogue” (People) and “the last urbane romantic” (Chicago Tribune). Book Magazine said of The Pursuit of Alice Thrift, “like Jane Austen, the past master of the genre, Lipman isn’t only out for laughs. She serves up social satire, too, that’s all the more trenchant for being deftly drawn.”

Her essays have appeared in the Boston Globe Magazine, Gourmet, Chicago Tribune, and The New York Times’ Writers on Writing series.  She received the New England Booksellers’ 2001 fiction award for a body of work and a 2007 lifetime achievement award from NELINET (New England Library and Information Network), “created to recognize the contributions of an individual associated with New England who has significantly advanced the arts and letters.”

"A funny, knowing novel about how love really does conquer all. . . . Thanks to Lipman's deft touch, the novel . . . rivals her own best work for its understanding of the way smart, opinionated people stumble toward happiness."  --Glamour