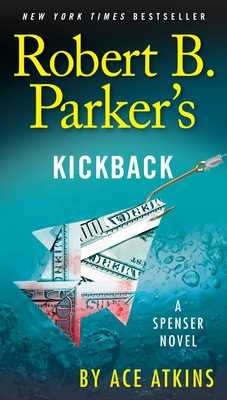 This is book number 44 in the Spenser series.

PI Spenser, knight-errant of the Back Bay, takes on corruption in the justice system in this stellar New York Times bestselling thriller in Robert B. Parker’s series.

What started out as a joke landed seventeen-year-old Dillon Yates in a lockdown juvenile facility in Boston Harbor. When he set up a prank Twitter account for his vice principal, he never dreamed he could be brought up on criminal charges, but that’s exactly what happened. This is Blackburn, Mass., where zero tolerance for minors is a way of life.

Leading the movement is tough-as-nails judge Joe Scali, who gives speeches about coming down hard on today’s wild youth. But Dillon’s mother, who knows other Blackburn kids who are doing hard time for minor infractions, isn’t buying Scali’s line. She hires Spenser to find the truth behind the draconian sentencing. From the Harbor Islands to a gated Florida community, Spenser and trusted ally Hawk follow a trail through the Boston underworld with links to a shadowy corporation that runs New England’s private prisons. They eventually uncover a culture of corruption and cover-ups in the old mill town, where hundreds of kids are sent off to for-profit juvie jails.

Robert B. Parker was the author of seventy books, including the legendary Spenser detective series, the novels featuring police chief Jesse Stone, and the acclaimed Virgil Cole–Everett Hitch westerns, as well as the Sunny Randall novels. Winner of the Mystery Writers of America Grand Master Award and long considered the undisputed dean of American crime fiction, he died in January 2010.

Ace Atkins is the New York Times bestselling author of the Quinn Colson novels, the first two of which—The Ranger and The Lost Ones—were nominated for the Edgar Award for Best Novel (he also has a third Edgar nomination for his short story, “Last Fair Deal Gone Down”). In addition, he is the author of several New York Times bestselling novels in the continuation of Robert B. Parker’s Spenser series. Before turning to fiction, he was a correspondent for the St. Petersburg Times, a crime reporter for the Tampa Tribune, and, in college, played defensive end for the undefeated Auburn University football team (for which he was featured on the cover of Sports Illustrated). He lives in Oxford, Mississippi.

Praise for Robert B. Parker’s Kickback

“It’s great to see Spenser tackle a social evil with its roots in real life.”—Kirkus Reviews

“Atkins does a wonderful job with the characters created by Parker. To loyalists it may be heresy, but a case can be made for the Atkins novels being better than some of the last Spenser mysteries penned by Parker. A top-notch thriller.”—Booklist

“Classic Spenser—the Spenser of wry wit, tasty food and drinks, hard workouts and lethal confrontations...Once again, Atkins has delivered a thriller that evokes the best of Parker’s Spenser series, not least the punchy back-and-forth of the dialogue.”—Associated Press

“Written in impeccable style by Ace Atkins...Robert B. Parker is smiling down on this brilliant Spenser adventure. It's full of everything we've come to expect from the Boston Private Investigator—action, smart-mouthed sarcasm, the assistance of Hawk and most of all, justice.”—Suspense Magazine

Praise for Ace Atkins and the Spenser Series

“Handpicked by the Parker estate to be the keeper of the flame for the Spenser franchise, award-winning author Ace Atkins rises flawlessly to the occasion. In addition to the signature dialogue, all the familiars are fully resurrected: Susan, the sexy shrink; Pearl, the wonder dog; Hawk, the wonder sidekick; good cop Quirk, and, of course, Spenser himself, that consummate knight errant for the twenty-first century.”—Kirkus Reviews

“It’s a feat when a writer creates characters who live and breathe on the page and make readers care and keep coming back for more. To manage that with someone else’s characters, let alone with an icon like Spenser, is a minor miracle. Ace Atkins pulls it off.”—Chicago Sun-Times