Who Was Jacques Cousteau? (Who Was?) (Paperback) 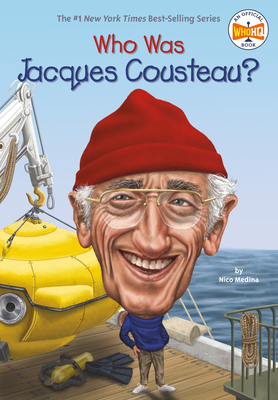 Who Was Jacques Cousteau? (Who Was?) (Paperback)


Email or call for price.
Jacques Cousteau is the most famous and beloved name in the world of deep-sea exploration. Cousteau discovered his passion in 1938, when he first used a pair of goggles to dive off the coast of France. During his time as a French naval officer, he carried out many deep-sea experiments and improved upon early diving equipment. Soon, Cousteau began filming his underwater excursions and offering the world a glimpse below the surface. The documentary television series The Undersea World of Jacques Cousteau made the man, his work, and his red cap famous throughout the world.
Nico Medina is the author of two YA novels and two previous books in the Who Was...? series. He works at a publishing house in New York City and lives in Brooklyn.