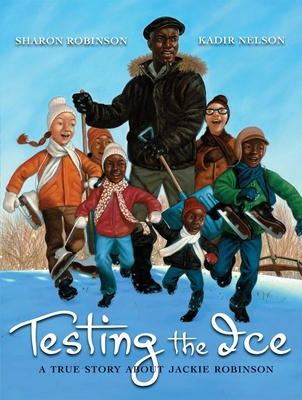 Sharon Robinson, the daughter of baseball legend Jackie Robinson, has crafted a hearwarming, true story about growing up with her father.When Jackie Robinson retires from baseball and moves his family to Connecticut, the beautiful lake on their property is the center of everyone's fun. The neighborhood children join the Robinson kids for swimming and boating. But oddly, Jackie never goes near the water. In a dramatic episode that first winter, the children beg to go ice skating on the lake. Jackie says they can go--but only after he tests the ice to make sure it's safe. The children prod and push to get Jackie outside, until hesitantly, he finally goes. Like a blind man with a stick, (contd.)