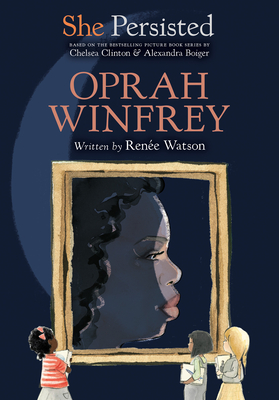 
Usually Ships in 1-5 Days
Inspired by the #1 New York Times bestseller She Persisted by Chelsea Clinton and Alexandra Boiger, a chapter book series about women who stood up, spoke up and rose up against the odds--including Oprah Winfrey!

In this chapter book biography by Newbery Honor and Coretta Scott King Award-winning author Renée Watson, readers learn about the amazing life of Oprah Winfrey--and how she persisted.

When Oprah Winfrey was growing up, her family expected her to become a maid like her grandmother. But she had different dreams. She went after them and turned her dreams into reality, becoming a media superstar and inspiring countless other people along the way.

Complete with an introduction from Chelsea Clinton, black-and-white illustrations throughout, and a list of ways that readers can follow in Oprah Winfrey's footsteps and make a difference! A perfect choice for kids who love learning and teachers who want to bring inspiring women into their curriculum.

And don’t miss out on the rest of the books in the She Persisted series, featuring so many more women who persisted, including Harriet Tubman, Ruby Bridges, Coretta Scott King, and more!

Praise for She Persisted: Oprah Winfrey:

* "This is a lively introduction to the life of a woman who beat many odds to become successful. . . . A highly recommended addition to this stellar series." --Kirkus Reviews, *STARRED REVIEW*

"A must purchase for all libraries." --School Library Journal
Renée Watson (reneewatson.net) is a New York Times bestselling author, educator, and activist. Her young adult novel Piecing Me Together received a Coretta Scott King Award and Newbery Honor. She is the author of several books for young readers, including Ways to Make Sunshine, Some Places More Than Others, and Harlem's Little Blackbird: The Story of Florence Mills. Her work has received international recognition and an NAACP Image Award nomination in children's literature. She has given readings and lectures on the role of art in social justice at many renowned places, including the United Nations Headquarters, the Library of Congress, and the U.S. Embassies in Japan, Korea, and New Zealand. Renée grew up in Portland, Oregon, and currently lives in New York City. Follow her on Twitter @reneewauthor and on Instagram @harlemportland.

Chelsea Clinton is the author of the #1 New York Times bestseller She Persisted: 13 American Women Who Changed the World; She Persisted Around the World: 13 Women Who Changed History; She Persisted in Sports: American Olympians Who Changed the Game; Don't Let Them Disappear: 12 Endangered Species Across the Globe; It's Your World: Get Informed, Get Inspired & Get Going!; Start Now!: You Can Make a Difference; with Hillary Clinton, Grandma's Gardens and Gutsy Women; and, with Devi Sridhar, Governing Global Health: Who Runs the World and Why? She is also the Vice Chair of the Clinton Foundation, where she works on many initiatives, including those that help empower the next generation of leaders. She lives in New York City with her husband, Marc, their children and their dog, Soren. You can follow Chelsea Clinton on Twitter @ChelseaClinton or on Facebook at facebook.com/chelseaclinton.

Gillian Flint (gillianflint.com) is an illustrator who has a passion for painting in watercolors. She has been drawing and creating characters for as long as she can remember. Her work has been published in the USA, the UK and Australia. In her spare time she enjoys reading and gardening at her home in the UK. You can follow her on Instagram @gillianflint_illustration.

Alexandra Boiger (alexandraboiger.com) has illustrated nearly twenty picture books, including the She Persisted series by by Chelsea Clinton; the popular Tallulah series by Marilyn Singer; and the Max and Marla books, which she also wrote. Originally from Munich, Germany, she now lives outside of San Francisco, California, with her husband, Andrea; daughter, Vanessa; and two cats, Luiso and Winter. You can follow Alexandra on Instagram @alexandra_boiger.
Praise for She Persisted: Oprah Winfrey:

* "This is a lively introduction to the life of a woman who beat many odds to become successful. . . . A highly recommended addition to this stellar series." --Kirkus Reviews, *STARRED REVIEW*

"A must purchase for all libraries." --School Library Journal