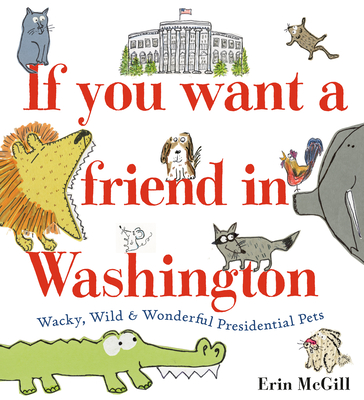 
Email or call for price.
A clever, funny, and informative look at the pets--from Calvin Coolidge's wallaby to Teddy Roosevelt's flying squirrels--that have passed through the White House gates. Perfect for fans of I Am George Washington and So You Want to Be President?

President Truman famously said, "If you want a friend in Washington, get a dog." And a dog is what many presidents got. From James Garfield to Calvin Coolidge to Richard Nixon, presidents often found a friend in Fido (in fact, Abe Lincoln's pup was actually named Fido). Others preferred cats, horses, small critters, or even big, ferocious animals like bears and alligators. With a catchy refrain ("If you want a friend in Washington . . . , "), this is a funny, educational book about the animals that have passed through the White House. Whether it's favorite dogs like Barbara Bush's Millie or the Obamas' Bo; Abraham Lincoln's cat, Dixie; Calvin Coolidge's hippo, Billy; or Andrew Jackson's foul-mouthed parrot, Poll, Erin McGill brings to life a menagerie of presidential pets in this entertaining, whimsical, and carefully researched picture book that's perfect for animal lovers and history buffs alike.
Erin McGill received a BFA in illustration at Pratt Institute, where she discovered her love of patterns, textiles, and collage. She is the recipient of the Ezra Jack Keats Memorial Fellowship, a Highlights Foundation grant, the SCBWI Portfolio Award, and the SCBWI Award for Humor. She is the author-illustrator of I DO NOT LIKE AL'S HAT, with two picture books forthcoming. This is her first nonfiction project.
“Great, fascinating, lighthearted fun.” —Kirkus Reviews, starred review

“The White House was often as much a menagerie as a residence. A fetching sidelight on U.S. history.” —Booklist, starred review

“This book is a treat.” —Publishers Weekly