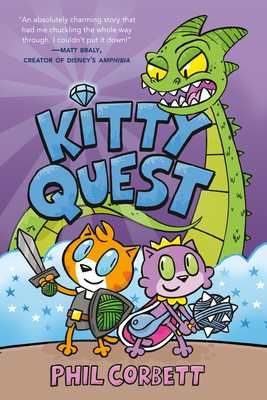 Dog Man meets the Lord of the Rings in this laugh-out-loud graphic novel debut about two aspiring adventurers who face off against startling ghosts, rampaging monsters, and bumbling wizards.

Matt Braly, creator of Disney's Amphibia, proclaims Kitty Quest is "an absolutely charming story that had me chuckling the whole way through. I couldn't put it down!"

Woolfrik and Perigold are two down-on-their-luck kittens in need of some extra cash, so they've decided to become professional monster slayers. Except they don't know the first thing about it! So when a huge beast starts rampaging through town, they are put to the ultimate test. Fortunately, the duo accidentally awakens a ghost named Earl Mortimore, who is the last not-so-living member of an ancient guild of warriors, and he's going to teach them everything he knows.

But the monster is just the beginning of their worries, because someone even more troublesome is pulling its strings. So even though they've never been in a battle--or even gone on a real quest before--it's up to these kittens to save the day and prove they've got what it takes to be heroes.

Phil Corbett is a professional storyteller. He was the last person to write and illustrate the adventures of one of the oldest comic characters in the world, Korky the Cat, from the UK comic magazine The Dandy. He's previously worked in the gaming and toy industry with clients such as Cartoon Network, Disney, Nickelodeon, Nintendo, and PlayStation. Kitty Quest is his debut graphic novel. You can see more of his work at www.philcorbett.com.

"Corbett’s graphic-novel debut, a series opener, will entertain fans of Dog Man and Zita the Spacegirl. Bright cartoon panels full of slapstick and sarcasm (with a soupçon of gross) zip across the pages like stills from the best Saturday-morning cartoons. An adventure in giggles for feline fantasy aficionados." —Kirkus

“[This] funny, fast-paced tale will not disappoint. The humor, bold colors, and easy-to-follow panels will delight readers. Fans of Dav Pilkey and Lincoln Peirce’s Max and the Midknights will clamor for this series starter.” —School Library Journal

“An absolutely charming story with lovable characters and fantastic wit. This delightful read had me chuckling the whole way through. I couldn’t put it down!” —Matt Braly, creator and executive producer of Disney’s Amphibia

“Fantastically funny and epically exciting! Kitty Quest is a ridiculous thrill from start to finish!” —Jamie Smart, creator of the Bunny vs. Monkey series

“A hilarious, magical, and downright silly story about some paws-itively delightful heroes! Kitty Quest is the purr-fect tale for any reader!” —Brett Bean, creator of the Zoo Patrol Squad series