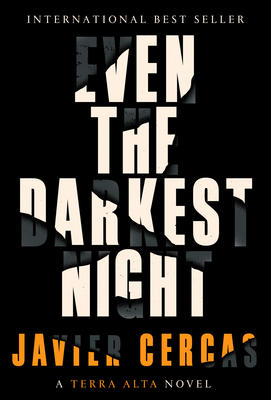 INTERNATIONAL BEST SELLER • WINNER OF SPAIN’S BIGGEST LITERARY PRIZE • Barcelona detective Melchor Marín is sent to the countryside to investigate a horrific double murder. Before long, it becomes clear that nothing about the case is quite as it seems in this “sweeping romantic novel in the form of a police procedural” (Wall Street Journal).

The first book in the internationally acclaimed series: Melchor, the son of a prostitute, went to prison as a teenager, convicted of working for a Colombian drug cartel. Behind bars, he read a book that changed his life: Les Misérables. Then his mother was murdered. He decided to become a cop.

This new case, in Terra Alta, a remote region of rural Catalonia—the murder of a wealthy local man and his wife—will turn Melchor’s life upside down yet again.

Even the Darkest Night is a thought-provoking, elegantly constructed thriller about justice, revenge, and, above all, the struggles of a righteous man trying to find his place in a corrupt world.

JAVIER CERCAS was born in Spain in 1962. He is a novelist and columnist, and he has received numerous international awards. His books include Soldiers of Salamis (which has sold more than a million copies worldwide), The Anatomy of a Moment, The Tenant and The Motive, The Speed of Light, and The Impostor. His books have been translated into more than thirty languages. He lives in Barcelona.

Translated from the Spanish by Anne McLean

“The plot that carries Melchor from the jailhouse to his first laurels as a cop is irresistible, a wonderful commingling of scrupulous realism and scandalous invention . . . It’s hard not to want to see where life, and Terra Alta, will take him next.”
—Garth Risk Hallberg, New York Times Book Review

“Javier Cercas has created an almost unique character in the history of contemporary western crime writing . . . One hell of a back story . . . Part-investigative procedural, part-contemporary noir, Even the Darkest Night is at heart a revenge tragedy, a story of multiple betrayals and loyalties with a Cercas-trademark meditation on redemption.”
—CrimeReads

U.K.
“Even the Darkest Night is the first in what promises to be an excellent series . . . History casts a long shadow over this tale of political and personal loyalties.”
—Guardian

“It stays in the memory . . . Cercas perfectly captures the fearful mood of a town in rural Catalonia after the crime.”
—The Sunday Times

“A wonderful novel. I look forward to many more Melchor stories.”
—The Tablet

Spain
“Cercas has spun an agile story whose mystery plot grips the reader right from the start and keeps the tension high until the end-game.”
—El Cultural

“Impeccable . . . Cercas is unafraid to explore his characters’ emotions, which, instead of toning down the narrative, deepens its impact.”
—El Periódico

“From beginning to end, this is a tense whodunit.”
—La Vanguardia

France
“Could it be that this series is as wide-ranging and addictive as Les Misérables?”
—Le Monde

“A novel that impresses with its power.”
—Le Figaro

“Leaves you breathless until the last page.”
—Télérama

“A resounding success . . . Cercas once again proves himself a remarkable storyteller.”
—Les Echos

“Cercas weaves a formidable story, admirably served by his unparalleled ability to embrace the world through the most intimate details . . . He wonderfully explores and dissects the psychology of each of his characters, from the purest feelings to the deepest darkness.”
—Page des Libraires

“A fabulous novel . . . Such powerful and luminous writing.”
—Le Point

Ireland
“Beautifully written, this is an immersive examination of the moral and emotional strains brought about by a heinous crime.”
—Irish Independent