What Is the Supreme Court? (What Was?) (Paperback) 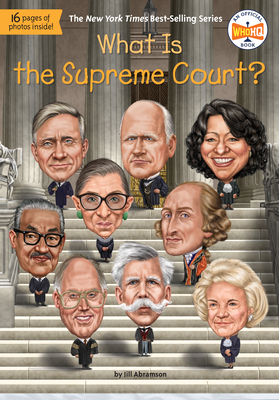 What Is the Supreme Court? (What Was?) (Paperback)


Usually Ships in 1-5 Days
Hear ye, hear ye! Get ready to learn all about the most powerful court in the United States.

Ever since it was established in 1789, the United States Supreme Court has had a major impact on the lives of all Americans. Some of its landmark decisions have helped end segregation, protected a person’s privacy, and allowed people to marry whomever they love.

Best-selling author, former executive editor of The New York Times, and self-confessed political junkie, Jill Abramson has written a detailed and fascinating book that explains how the highest court in the United States works, who gets to serve on it, which cases have had the greatest impact on the country, and why the US justice system is so vital to democracy.

With 80 black-and-white illustrations and an engaging 16-page photo insert, readers will be excited to read this addition to this New York Times Best-Selling series.
Jill Abramson has had an illustrious career in journalism. She teaches journalism at Harvard, but most importantly, she is the younger sister of Jane O'Connor, who edited this book. She lives in Madison, Connecticut.