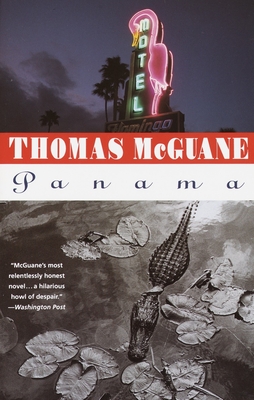 Panama is the harrowing and hilarious story of a washed-up rock star with kamikaze passion in Key West—and is widely considered to be the most autobiographical novel of one of our most important Americal writers, the author of Ninety-two in the Shade and Cloudbursts

Chester Pomeroy is a one-time rock star turned casualty of illicit substances. In the hands of Thomas McGuane, Chester's story is a high-wire act of extravagant emotion and steel-nerved prose. As he haunts Key West, pestering family, threatening a potential in-law with a .38, and attempting to crucify himself on his ex's door out of sheer lovesickness, Chester emerges as the pure archetype of the McGuane hero.

THOMAS McGUANE lives on a ranch in McLeod, Montana. He is the author of ten novels, including the National Book Award-nominated Ninety-two in the Shade, three works of nonfiction, and four collections of stories. His work has won numerous awards, including the Rosenthal Award of the American Academy and Institute of Arts and Letters, and has been anthologized in the Best American Stories, Best American Essays, and Best American Sporting Essays.

"McGuane's most relentlessly honest novel.... A hilarious howl of despair." —The Washington Post

"Thomas McGuane is the pool shark of our prose. His sentences click with imperious precision.... The words swerve with fatal charm." —Christian Science Monitor

"Whatever risk McGuane may have sensed in attempting [Panama], the feat proves successful. The audience is left dazzled." —The New Yorker