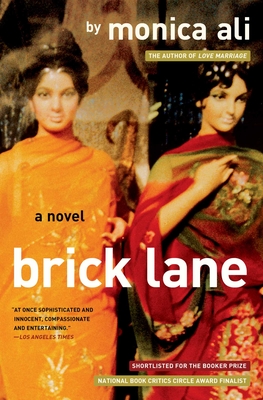 “A book you won’t be able to put down. A Bangladeshi immigrant in London is torn between the kind, tedious older husband with whom she has an arranged marriage (and children) and the fiery political activist she lusts after. A novel that’s multi-continental, richly detailed and elegantly crafted.” —Curtis Sittenfeld, author of Sisterland

After an arranged marriage to Chanu, a man twenty years older, Nazneen is taken to London, leaving her home and heart in the Bangladeshi village where she was born. Her new world is full of mysteries. How can she cross the road without being hit by a car (an operation akin to dodging raindrops in the monsoon)? What is the secret of her bullying neighbor Mrs. Islam? What is a Hell's Angel? And how must she comfort the naïve and disillusioned Chanu?

Monica Ali’s splendid novel is about journeys both external and internal, where the marvelous and the terrifying spiral together.

Monica Ali was born in Dhaka, Bangladesh, and grew up in England. She was named one of the 20 best young British novelists under 40 by Granta. She is the author of four previous novels, including Untold Story and Brick Lane, which was shortlisted for the Booker Prize and the Guardian Book Prize, nominated for the National Book Critics Circle Award and the Los Angeles Times Book Prize, and was named a winner of the 2003 Discover Award for Fiction and a New York Times Editors’ Choice Book that same year. She lives in London with her husband and two children.

“Brick Lane is deeply rewarding...  a popular success fueled by a critical one...One feels the enabling weight of the 19th century, of a history of novels about people cut off from their origins, adrift in Europe’s great cities... Monica Ali... has an inborn generosity that cannot be learned.” —The New York Times Book Review

“Splendid... Daring... Brilliant... Refreshing... Intensely gripping and involving...The power of Ali’s book is the way in which it charts its heroine’s slow accumulation of English, her gathering confidence as a mother and a wife, and the undulations of her marriage to a man whom she eventually learns to respect and perhaps even to love... Brick Lane is a great achievement of the subtlest storytelling.” —The New Republic

“A genuinely moving portrait ...  Brick Lane manages to do many of the things that fiction does best.” —The Washington Post Book World

“Ali’s sharp-witted tale explores the immigrant’s dilemma of belonging... In Ali’s subtle narration, Nazneen’s mixture of traditionalism and adaptability, of acceptance and restlessness, emerges as a quiet strength.” —The New Yorker

“In a first novel of surprising sophistication and assurance, Ali treats potentially heavy-handed themes with both grace and thoughtfulness.” —Entertainment Weekly

“This confident first novel reveals how change can take root slowly and firmly, even in the most reticent of hearts.” —O, The Oprah Magazine

“Brick Lane... establishes Ali as a writer of real literary depth and dimension. There is an elegance and a steadfast, patient, careful construction of observed detail to this prose, a meticulous layering of character and social observation that endows Brick Lane with a sophistication and maturity that might surprise readers who’ve come to expect flash and dash in modern fiction.” —The Nation

“Exciting and timely... Brick Lane is a serious work in the best sense of the term. It has weight, purpose and passion.” —The Miami Herald

“Ali succeeds brilliantly in presenting the besieged humanity of people living hard, little-known lives on the margins of a rich, self-absorbed society.” —The New York Review of Books

“The realistic complexity of the characters is quietly stunning...Carefully observed and assured, the novel is free of pyrotechnics, its power residing in Ali’s unsparing scrutiny of its hapless, hopeful protagonists.” —Publishers Weekly (starred)

“The book Brick Lane closely resembles is Pride and Prejudice, only transplanted to the 21st century and given a more boisterous cast of characters. Like Jane Austen, Ali is an astute observer of social relations who understands that Society with a capital S can warp the foundation of any relationship. More important, she has given us a character who, like one of Austen’s women, is trapped and smothered by a society that encourages her ignorance. With this beautiful and intensely readable first novel, she has given that woman—and many like her—a resounding voice.” —Star Tribune

“Dazzling...  her characters are startlingly specific and real yet stand in for essential cultural conflicts.” —New York

“Ali is extraordinary at capturing the female immigrant experience through her character’s innocent perspective.” —Booklist

“Ali’s writing is beautiful, a textured exploration of the immigrant experience in England, the crushed dreams and conflicts between immigrants and their first-generation children.” —The Denver Post

“Ali is one of those dangerous writers who sees everything.” —Kirkus Reviews (starred)

“The genius of Brick Lane lies in Ali’s ability to make the peculiar universal ...  the larger world resonates all along the edges...Ali handles Nazneen with a delicate wit...She follows her progress so closely, so sympathetically that it’s a moment of real delight when Nazneen finally cries out, ‘I will say what happens to me. I will be the one.’” —The Christian Science Monitor

“Plainly written and all the more moving for it... Ali paints layers of everyday detail ...  but by the end, the story she tells is burnished with a warm, believable richness.” —Newsday

“A humanely forgiving story about love... Brick Lane may be Ali’s first novel, but it is written with a wisdom and skill that few authors attain in a lifetime.” —The Sunday Times (London)

“The joy of this book is its marriage of a wonderful writer with a fresh, rich and hidden world...  written with love and compassion for every struggling character in its pages.” —Evening Standard (London)

“Monica Ali spins each character with the golden thread of individual hope...  It is Nazneen’s ability to raise her eyes and her imagination from the paving stones of Brick Lane that makes this book so uplifting as well as so important.” —The Daily Telegraph (London)

“Warm, shrewd, startling and hugely readable: the sort of book you race through greedily, dreading the last page.” —The Observer (London)

“Brick Lane is a brilliant book about things that matter.” —Ian Jack, Granta

“Monica Ali’s power as a storyteller, her wisdom and compassionate stance, make this remarkable novel a total-immersion experience. I was quickly taken over by the community, culture, and vision she presents so forcefully.” —Amy Hempel, author of Tumble Home and Reasons to Live