Ice Bear with Audio, Peggable: Read, Listen, & Wonder: In the Steps of the Polar Bear (Paperback) 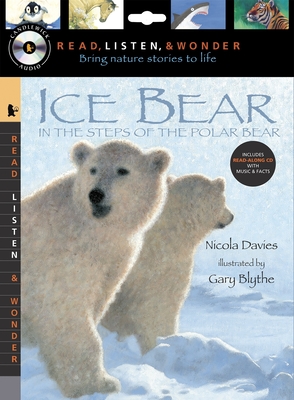 Ice Bear with Audio, Peggable: Read, Listen, & Wonder: In the Steps of the Polar Bear (Paperback)


Email or call for price.
Follow the path of the magnificent polar bear as it strives to survive in an age-old Arctic habitat threatened by global warming.

This vibrant book-and-CD series brings the best of our Read and Wonder nature stories to life.

Each paperback title in the series includes a CD that features:
- an engaging read-aloud with sound effects
- a segment focusing on fascinating facts
- a read-along opportunity guided by prompts

Huge, magnificent, and solitary, a polar bear moves through the frozen Arctic. Powerful hunter, tireless swimmer, tender mother, gentle playmate — she is superbly adapted for surviving, even thriving, in this harsh and icy climate. Written in poetic language interspersed with fascinating facts, Nicola Davies' breathtaking tale of this massive, stark white animal is brought to life in striking paintings by Gary Blythe. Just as the Inuit people have watched and learned from this amazing creature for generations, readers are invited to witness the majesty of Ice Bear.

Back matter includes a note about polar bears and an index.