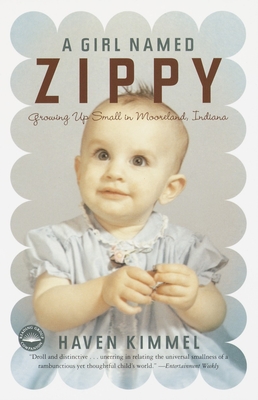 
On Our Shelves Now
The New York Times bestselling memoir about growing up in small-town Indiana, from the author of The Solace of Leaving Early.

When Haven Kimmel was born in 1965, Mooreland, Indiana, was a sleepy little hamlet of three hundred people. Nicknamed "Zippy" for the way she would bolt around the house, this small girl was possessed of big eyes and even bigger ears. In this witty and lovingly told memoir, Kimmel takes readers back to a time when small-town America was caught in the amber of the innocent postwar period–people helped their neighbors, went to church on Sunday, and kept barnyard animals in their backyards.

Laced with fine storytelling, sharp wit, dead-on observations, and moments of sheer joy, Haven Kimmel's straight-shooting portrait of her childhood gives us a heroine who is wonderfully sweet and sly as she navigates the quirky adult world that surrounds Zippy.
Haven Kimmel studied English and creative writing at Ball State University and North Carolina State University and attended seminary at the Earlham School of Religion. She lives in Durham, North Carolina.
"Almost dreamlike in some of [her] elusive storytelling, [Kimmel] pulls off a feat that’s harder than it looks: write for adults from a child’s perspective . . . Zippy's parents must have done something right to produce a girl who could write such a simple and lovely book."
–USA Today

"A Girl Named Zippy seems to be about the cleverest . . . memoir ever. [Kimmel is] a born storyteller . . . I imagine everyone in the world would be grateful for Kimmel’s book."
–Orlando Sentinel

"Very engaging, funny . . . it could be a cheerier version of the Leechfield, Texas, Mary Karr chronicled in The Liar’s Club, if drunks never got ugly and if fathers never took a belt to their kids."
–Hartford Courant