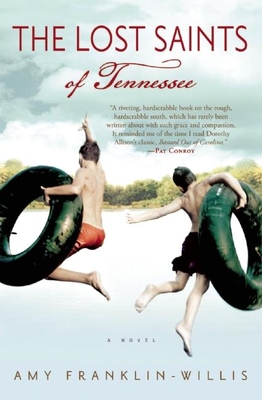 “Ezekiel Cooper, a 42-year-old divorcee living in Tennessee and still grieving the death of his twin brother 10 years earlier, has decided to end his life and the life of Tucker, his brother's dog. Luckily for the reader he is unsuccessful, and we share his voyage from the 1940s to the 1980s as a son, brother, husband, and father. Ezekiel and his mother relate their tales of mistakes made, the need for forgiveness, and the real meaning of family in a story full of love and grace. You will not want to put this book down.”
— Karen Briggs, Great Northern Books and Hobbies, Oscoda, MI

Pitch-perfect . . . In her powerful debut, Franklin-Willis expertly crafts a Southern novel that stands with genre classics like The Prince of Tides and Bastard out of Carolina. . . . A measured, slow-burning book, with complex, compelling characters and secrets. A beautiful novel from a talented new author, The Lost Saints of Tennessee proves that in great literature, as in life, we must always expect the unexpected.--Bookpage With enormous heart and dazzling agility, debut novelist Amy Franklin-Willis expertly mines the fault lines in one Southern working-class family. Driven by the soulful and intrepid voices of forty-two-year-old Ezekiel Cooper and his mother, Lillian, The Lost Saints of Tennessee journeys from the 1940s to the 1980s as it follows Zeke's evolution from anointed son to honorable sibling to unhinged middle-aged man. After Zeke loses his twin brother in a mysterious drowning and his wife to divorce, only ghosts remain in his hometown of Clayton, Tennessee. Zeke makes the decision to leave town in a final attempt to escape his pain, puts his two treasured possessions--a childhood copy of The Adventures of Huckleberry Finn and Tucker, his dead brother's ancient dog--into his truck, and heads east. He leaves behind two young daughters

An eighth-generation Southerner, Amy Franklin-Willis was born in Birmingham, Alabama. In 2007, she received an Emerging Writer Grant from the Elizabeth George Foundation to complete The Lost Saints of Tennessee. www.amyfranklin-willis.com