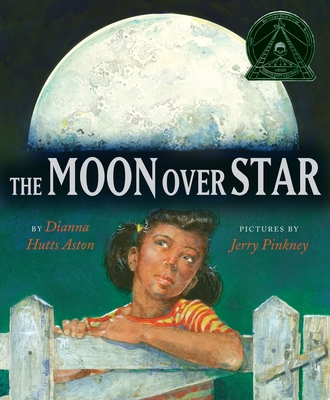 In July 1969, the world witnessed an awe-inspiring historical achievement when Neil Armstrong and Buzz Aldrin became the first humans to set foot on the moon. For the young protagonist of this lyrical and hopeful picture book, that landing is something that inspires her to make one giant step toward all of the possibilities that life has to offer.

Dianna Hutts Aston is the author of Mama's Wild Child / Papa's Wild Child, When You Were Born (Candlewick), and An Egg is Quiet (Chronicle). She lives in San Miguel de Allende, Mexico.

Jerry Pinkney is one of America's most admired children's book illustrators. He has won the Caldecott Medal and five Caldecott Honors, five Coretta Scott King Awards, five New York Times Ten Best Illustrated Awards, the Coretta Scott King-Virginia Hamilton Award for Lifetime Achievement, the Laura Ingalls Wilder Award, and the Society of Illustrators' Original Art Show Lifetime Achievement Award, and many other prizes and honors. Recently a member of the National Council of the Arts and inducted into the American Academy of Arts and Sciences, he has also served on the U.S. Postal Service Citizen’s Stamp Advisory Committee. His artwork has been exhibited in galleries and museums throughout the country, including the Art Institute of Chicago, the Philadelphia Museum of Art, the Schomburg Center, and the Norman Rockwell Museum. Jerry Pinkney lives with his wife, author Gloria Jean Pinkney, in Westchester County, New York.