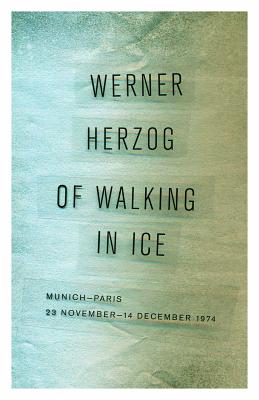 In late November 1974, filmmaker Werner Herzog received a phone call from Paris delivering some terrible news. German film historian, mentor, and close friend Lotte Eisner was seriously ill and dying. Herzog was determined to prevent this and believed that an act of walking would keep Eisner from death. He took a jacket, a compass, and a duffel bag of the barest essentials, and wearing a pair of new boots, set off on a three-week pilgrimage from Munich to Paris through the deep chill and snowstorms of winter.

Of Walking in Ice is Herzog’s beautifully written, much-admired, yet often-overlooked diary account of that journey. Herzog documents everything he saw and felt on his quest to his friend’s bedside, from poetic descriptions of the frozen landscape and harsh weather conditions to the necessity of finding shelter in vacant or abandoned houses and the intense loneliness of his solo excursion.

Includes, for the first time, Werner Herzog’s 1982 “Tribute to Lotte Eisner” upon her receipt of the Helmut Käutner Prize

Werner Herzog has produced, written, and directed more than fifty films, including Nosferatu the Vampyre; Aguirre, the Wrath of God; Fitzcarraldo; and Grizzly Man. He grew up in a remote mountain village in Bavaria and now lives in Los Angeles, California.

"Herzog's existential journey through a hostile winter landscape is one of the great modern pilgrimages—a record of physical suffering, of hallucination and ecstatic revelation, of portents and animals, of the wreckage of history and myth. Of Walking in Ice has the eerie power of the best fairytales. It hits you with the force of dreams and leaves you with the taste of snow-filled air."—Helen Macdonald

"Surely the strangest, strongest walking book I know, it tells the story of a winter pilgrimage, made in desperation and in hope. At once a diary, a blizzard of weather and memories, and the record of a ritual: only Herzog could have written this weird, slender classic."—Robert Macfarlane

"Herzog's pilgrimage is a fugue and an absurdist comedy as rich as anything in his cinema."—Iain Sinclair

"A poetic rendering of a fraught and wild pilgrimage."—Kirkus Reviews

"Herzog’s slight narrative is captivating because his experiences humanize the legendary filmmaker. He is full of curiosity and wonder. Even when he meanders into strange asides, Herzog remains interesting."—Publishers Weekly

"Herzog’s private dairy of his journey was first published four years later on. Titled Of Walking in Ice, it’s now being reissued by the University of Minnesota Press. It is a weird and wonderful document—a vital record of Herzog’s creation of his famous, baffling self."—Slate

"Of Walking in Ice is not always particularly easy or pleasant to read. Nonetheless, Herzog’s tortuous prose makes you feel his pain. The further you read, the more you feel the anguish of the repetitiveness of walking alone."—Full Stop

"You almost forget that Herzog must have been writing these entries at the end of the day, because of course he couldn’t walk and experience and chronicle at the same time. And yet, like film, there is a vital sense of the now in his writing."—Film International