The Days Are Just Packed (Calvin and Hobbes #12) (Paperback) 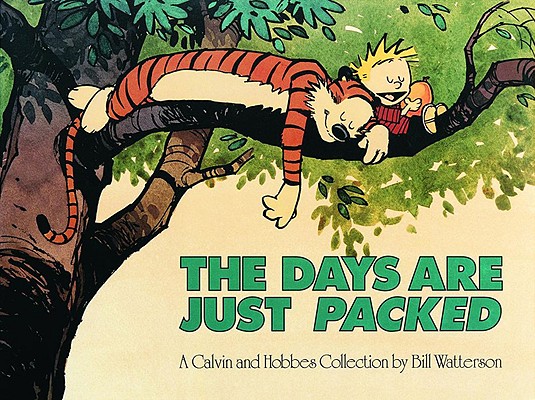 The Days Are Just Packed (Calvin and Hobbes #12) (Paperback)

This is book number 12 in the Calvin and Hobbes series.

Zounds! Spaceman Spiff, Stupendous Man, the ferocious tiger Hobbes, and the rest of Calvin's riotous imagination are all included in The Days Are Just Packed.

Calvin, the self-proclaimed "Boy of Destiny," continues to save the universe with his alter egos, Spaceman Spiff and Stupendous Man, at least until Miss Wormwood or his mother bring him back to reality. Susie, Calvin's nemesis and love interest, remains Calvin's favorite target. And when he's not recovering from a ferocious tiger attack, Calvin creates hideous snowmen, plays a moral cat-and-mouse game with Santa, conducts his infamous Dad polls, and combats the monsters under his bed.
Bill Watterson is the creator of Calvin and Hobbes, one of the most popular and well-regarded cartoon strips of the twentieth century. Calvin and Hobbes appeared in newspapers from November 1985 until Watterson's retirement in 1995.