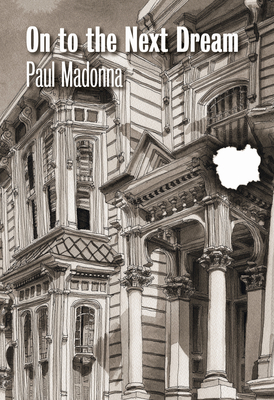 Paul Madonna's popular comic, All Over Coffee had been running for twelve years in the San Francisco Chronicle when he was evicted from his longtime home and studio in the Mission District, ground-zero in the "tech wars" transforming the city. Suddenly finding himself yet another victim of San Francisco's overheated boomtown housing market, with its soaring prices and rampant evictions, Madonna decided to use his comic as a cathartic public platform to explore the experience, and to capture the complex, highly charged atmosphere of a city--and a life--being forced through a painful transition.

In a series of drawings and stories, Madonna evokes the sense of vertigo induced by being forced from his home, and the roil of emotions that ensue as he enters into the city's brutal competition for a place to live. The line between reality and surreality begins to blur almost immediately, in real life and in his comic. Absurd, maddening, and all-too-poignant, these drawings and stories capture the spirit of not just San Francisco, but a cultural epidemic that has now spread to cities around the world.

For years I've been intrigued and charmed by Paul Madonna's careful and thoughtful drawings of overlooked nooks and by-ways of San Francisco. In his new book he now combines them with manic, delirious, and increasingly paranoid writings as he struggles with the all-consuming City dilemma of gentrification; of who came first, who gets to stay, which wave of usurpers is more 'real' and deserving than the next, and finally, what happens when someone decides it's your turn to go. Beautiful and engaging. --Sandow Birk, visual artist

Madonna has created a kind of San Francisco Realism, details so absurd, cruel, and beautiful that they can only come from our infuriating home. If Charlie Kaufman squatted in an illegal sublet in Armistead Maupin's mind, this would be the lovely tenant.--Joshua Mohr, author of All This Life

Paul Madonna's On to the Next Dream is bleak, terrifying, hilarious and lovely.--MariNaomi, author and illustrator of Turning Japanese

Simply delightful. I really don't like much out there, I really don't, but On to the Next Dream I couldn't put down. It was sharp, clever, honest, and maybe the funniest book on eviction ever written.--New Yorker cartoonist and New York Times bestselling author, Bob Eckstein, Footnotes from the World's Greatest Bookstores

Progress--that is, gentrification--marches on in San Francisco, for better and for worse, in this fantastical narrative from the creator of All Over Coffee. What separates On to the Next Dream from other stories of gentrification is the strange sense of unreality (oddly reminiscent of Norton Juster's The Phantom Tollbooth, of all things) that accompanies artist/writer Paul Madonna's fictionalized struggle to survive in a rapidly changing San Francisco.--Deborah Krieger, Popmatters

Much has been written about the 'tech wars' that have made living in San Francisco an impossible dream for old-timers and young workers. For writer and graphic artist Paul Madonna, the issue became personal when he found himself evicted from his Mission District home. Combining narrative and his distinctive graphics, On to the Next Dream depicts Madonna's struggle to find new digs.--Georgia Rowe, San Jose Mercury News

Paul Madonna is the author of the long running San Francisco Chronicle series, All Over Coffee. His new book, On to the Next Dream, offers an absurdist take on his eviction from his Mission District home of ten years. Absurdist, but all too real. . . . Madonna should win a unanimous vote for best book opening of 2017."--Randy Shaw, BeyondChron

Madonna has a new book that describes a kind of living nightmare that began when he received an eviction notice from his landlord that sent him into shock. In clean, crisp words and stark images, On to the Next Dream describes an emotional journey that took Madonna from anger and desperation to shame, sadness and acceptance." --Jonah Raskin, San Francisco Chronicle

Praise for Everything is its own reward by Paul Madonna:

The book is fantastic. Of time and tenderness. Beautiful drawings. Beautiful text. Ethereal and serious at once. The book is its own reward.--Maira Kalman, illustrator

Mesmerizing . . . When his international images are paired with his sparse, poetic words--sometimes thought-provoking one-liners such as 'You don't get anywhere without searching' and sometimes long, meandering sections of dialogue and story--the effect is haunting. --Oprah.com

Paul Madonna is a San Francisco-based artist and writer. He is the creator of the comic series "All Over Coffee" and the author of two books, All Over Coffee and Everything is its own reward. His drawings and stories have appeared in numerous books and journals as well as galleries and museums, including the San Francisco Contemporary Jewish Museum and the Oakland Museum of California.

Paul Madonna is a San Francisco-based artist and writer. He is the creator of the series All Over Coffee (San Francisco Chronicle 2004-2015), and the author of two books, All Over Coffee (City Lights 2007), and Everything is its own reward (City Lights 2011), which won the 2011 NCBR Recognition Award for Best Book. Paul s work is about pairing elements: text and images; concept and craft; thought and beauty. Paul s drawings and stories have appeared in numerous international books and journals as well as galleries and museums, including the San Francisco Contemporary Jewish Museum and the Oakland Museum of California. He is the Comics Editor for TheRumpus.net, has taught drawing at the University of San Francisco, and frequently lectures on creative practice, even when not asked. He holds a BFA from Carnegie Mellon University, and was the first (ever!) Art Intern at MAD Magazine (1993-94), for which he proudly received no money."