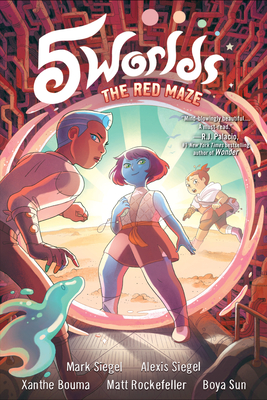 In book 3, Oona Lee is determined to light Moon Yatta's beacon and continue her quest to save the galaxy. But reaching the red beacon means navigating an impossible maze of pipes and facing devious enemies at every turn. Luckily, her friend Jax Amboy has returned from his adventures transformed! Now he must confront the owner of his former starball team, a ruthless businessman who will stop at nothing to get his best player back on the field . . . and who can grant them access to the beacon. Meanwhile, Oona and An Tzu find a mysterious rebel leader and release a surprising power within Oona's magic. Will they make it in time to stop the evil force seeking to rule the 5 Worlds?

"Bang-zoom . . . a series that promises to be epic." --The New York Times Book Review

"A dazzling interplanetary fantasy . . . that will easily appeal to fans of Naruto or Avatar: The Last Airbender." --Publishers Weekly, Starred Review
MARK SIEGEL has written and illustrated several award-winning picture books and graphic novels, including the New York Times bestseller Sailor Twain and Oskar and the Eight Blessings. He is also the founder and editorial director of First Second Books. He lives with his family in New York. Find Mark at marksiegelbooks.com and the 5 Worlds team on Twitter at @5WorldsTeam.

ALEXIS SIEGEL is a writer and translator who has translated a number of bestselling graphic novels, including Joann Sfar's The Rabbi's Cat and Pénélope Bagieu's Exquisite Corpse into English and Gene Luen Yang's American Born Chinese into French.

XANTHE BOUMA is an illustrator based in Southern California. Her work includes picture books, such as Little Sid, fashion illustration, and comics. Follow Xanthe on Tumblr at @yumbles and on Twitter at @xoxobouma.

MATT ROCKEFELLER is an illustrator and comic artist from Tucson, Arizona. His work includes book covers, animation, and picture books such as Train, Rocket, and Pop! Follow him on Tumblr at @mrockefeller and on Twitter at @mcrockefeller.

BOYA SUN is an illustrator and coauthor of the graphic novel Chasma Knights. Originally from China, Boya now lives in Northern California. Follow Boya on Tumblr at @boyasun and on Twitter at @boyaboyasun.
"It’s no secret that I’m a big fan of this graphic novel series, and this third installment definitely lived up to expectations! . . . Outstanding."  —MuggleNet.com

"Oona, with her bright blue skin and joyful dancing, again lights up the pages as new allies, some with conflicts or agendas of their own, join the notably diverse cast on the way to a tense, explosive climax. . . . Dazzling." —Kirkus Reviews

"Nicely paced and with moving character growth, this installment, bearing an unsettling resemblance to our own current political climate, carries the sci-fi quest along compellingly." —Booklist

"A magical journey, as fun as it is beautiful!” —Kazu Kibuishi, #1 New York Times bestselling creator of AMULET

“This stellar team has created a gorgeous and entrancing world like no other!” —Noelle Stevenson, New York Times bestselling author of Nimona

“Epic action, adventure, and mystery will draw you in, but the heartfelt characters and their seemingly impossible journey will keep you turning the pages.” —Lisa Yee, author of the DC Super Hero Girls™ series

"The adventure continues, growing grander of scale and if possible even more lavish in visual detail." —Kirkus Reviews

“Richly rendered settings await lovers of sci-fi world-building, and there is plenty of adventure as truths are uncovered. . . Give to fans of Judd Winick’s HILO or Kazu Kibuishi’s Amulet series.” —SLJ

"The beautiful illustrations will have young readers flying through the pages." —Deseret News