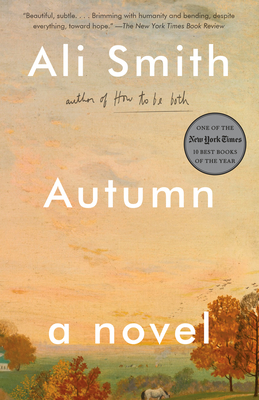 MAN BOOKER PRIZE FINALIST • The first novel in Ali Smith’s Seasonal Quartet is an unforgettable story about aging and time and love—and stories themselves.

Autumn. Season of mists and mellow fruitfulness. Two old friends—Daniel, a centenarian, and Elisabeth, born in 1984—look to both the future and the past as the United Kingdom stands divided by a historic, once-in-a-generation summer. Love is won, love is lost. Hope is hand-in-hand with hopelessness. The seasons roll round, as ever.

A luminous meditation on the meaning of richness and harvest and worth, Autumn is the first installment of Ali Smith’s Seasonal Quartet, and it casts an eye over our own time: Who are we? What are we made of? Shakespearean jeu d’esprit, Keatsian melancholy, the sheer bright energy of 1960s pop art. Autumn is wide-ranging in time-scale and light-footed through histories.

ALI SMITH is the author of many works of fiction, including, most recently, Summer, Spring, Winter, Autumn, Public Library and Other Stories, and How to Be Both, which won the Baileys Women's Prize for Fiction, the Goldsmiths Prize, and the Costa Novel of the Year Award. Her work has been shortlisted four times for the Booker Prize. Most recently, she won the George Orwell Prize for Fiction for Summer. Born in Inverness, Scotland, she lives in Cambridge, England.

“Beautiful, subtle. . . . Brimming with humanity and bending, despite everything, toward hope.” —The New York Times Book Review

“Shimmers with wit, melancholy, grief, joy, wisdom, small acts of love and, always, wonder at the seasons.” —The Boston Globe

“Ali Smith has a beautiful mind. [Autumn is] unbearably moving in its playful, strange, soulful assessment of what it means to be alive at a somber time.” —The New York Times

“Bliss from beginning to end. . . . However stormy the events and themes of Smith’s work, their presiding spirit is sunny, witty, and expansive.” —Laura Miller, Slate

“A wonder of deep and accommodating compassion.” —The Washington Post

“Gorgeously constructed. . . . Smith has a kind of irrepressible sense of joy.” —The Atlantic

“Knits together an astonishing array of seemingly disparate subjects. . . . Free spirits and the lifeforce of art—along with kindness, hope, and a readiness ‘to be above and beyond the foul even when we’re up to our eyes in it’—are, when you get down to it, what Smith champions in this stirring novel.” —NPR

“[A] masterwork on the post-Brexit world. . . . Impressionistic and deeply personal.” —New York

“Smith’s novel plays an intimate melody against a broader dissonance, probing the friendship between an art historian and an aging songwriter as they grapple with personal predicaments and a perilous world.” —O, The Oprah Magazine

“Delights in puns and lyric reveries. For a book about decline and disintegration, Autumn remains irrepressibly hopeful about life, something ‘you worked to catch, the intense happiness of an object slightly set apart from you.’” —The Wall Street Journal

“Autumn is a beautiful, poignant symphony of memories, dreams and transient realities; the ‘endless sad fragility’ of mortal lives.” —The Guardian (London)

“If Ali Smith’s four quartets in, and about, time do not endure to rank among the most original, consoling and inspiring of artistic responses to “this mad and bitter mess” of the present, then we will have plunged into an even bleaker midwinter than people often fear.” – Financial Times

“In Britain, Smith has won the Whitbread, the Goldsmiths, and the Costa prizes, and has been shortlisted for the Man Booker three times. American readers ought to be better acquainted with her genius. . . . This ambitious four-novel sequence will end with summer and Smith in her element. If we are all very lucky, perhaps the world will catch up with her there, too.” —Slate

“Smith’s voice, so wise and joyful, is the perfect antidote to troubled times: raw and bitter in the face of injustice, yet always alive to hope, however slight – like the buddleia that blossomed in the wreckage of cities after the Second World War, calmly continuing its own natural cycle oblivious to human destruction.” – New Statesman

“Smith regales us with endless wordplay. . . . Autumn is the first installment of Smith's ‘Seasonal’ quartet. If this brilliantly inventive and ruminative book is representative of what is to come, then we should welcome Smith's winter chill whatever the season.” —Minneapolis Star Tribune

“I find reason for excitement when Ali Smith, with thirteen titles to her credit and numerous awards and honors, brings out a new work. . . . A cycle is unfolding: winter seems to lie ahead. . . . But in inverse proportion to defeat is the great pleasure of the reading. Smith’s prose is seductively simple, beguiling, its effects hard-won.” —Edward T. Wheeler, Commonweal

“Smith is brilliant on what the referendum has done to Britain. . . . I can think of few writers—Virginia Woolf is one, James Salter another—so able to propel a narrative through voice alone. . . . This is a novel that works by accretion, appearing light and playful, surface-dwelling, while all the time enacting profound changes on the reader’s heart.” —Alex Preston, Financial Times

“Hums with life. . . . [Smith] is indeed a writer in her prime. Autumn is clever and invigorating. The promise of three more books to come is something to be savored.” —The Washington Times

“It is undoubtedly Smith at her best. . . . This book sets Smith’s complex creative character in stone: puckish yet elegant, angry but comforting. Long may she Remain that way.” —The Times (London)

“Already acknowledged as one of the most inventive novelists writing in Britain today, with her new novel, Autumn, Ali Smith also proves herself to be one of the country’s foremost chroniclers, her finger firmly on the social and political pulse.” —The Independent (London)

“Proving Smith’s ambition and scope, Autumn is the first in a four-part series (the other titles will be Spring, Winter and Summer). . . . If the first instalment is anything to go by, the series is destined to become a canon classic. . . . That Smith has done so with such impressive sleight of hand, and with such expediency, is incredible.” —The Irish Independent

“An ambitious, multi-layered creation. . . . Smith is convincing as both a 12-year-old girl proud of her new rollerblades and a man living in a care home. . . . The story is rooted in autumn, and Smith writes lyrically about the changing seasons. . . . An energising and uplifting story.” —Evening Standard

“Smith writes in a liltingly singsong prose that fizzes with exuberant punning and wordplay. . . . Compellingly contemporary. . . . [An] appeal to conscience and common humanity—intergenerational, interracial, international—in these deeply worrying times.” —The Irish Times

“Uplifting. . . . A beautiful meditation. . . . Given this is the first of a quintet of season-based novels that explore time, Winter can’t come soon enough. Smith is at the very peak of her powers.” —The National (Arts & Life)

“[A] vision of post-Brexit England. . . . Ekphrasis permeates the novel Autumn, which itself seeks to capture in words the fading, abstract beauty of that ‘season of mists and mellow fruitfulness,’ as Romantic poet John Keats wrote in his ode To Autumn. . . . [Smith’s] novel is marked with quiet, brave notes of hope.” —The Straits Times

“In bringing together the present and the seasons, Smith brings to contemporary politics the timeless injunction of art: to stop and look. . . . Autumn shows that the contemporary novel can be both timeless and timely. This may simply be what good novels always have done, but Smith reminds us how to do it, even now.” —Public Books

“An elegiac musing on transience and time. . . . [Smith] leaves readers with a symbol of hope.” —The Culture Trip

“Offers a piercing view of an unsettled England in the aftermath of the 2016 Brexit vote. . . . Much of this novel’s pleasure flows from Smith’s supple prose. She indulges in word play with an almost Joycean zest.” —BookPage

“Stunning. . . . A triumphant story of a May-December friendship within a divided Britain.” —Shelf Awareness

“[A] splendid free-form novel—the first in a seasonally themed tetralogy. . . . Eschewing traditional structure and punctuation, the novel charts a wild course through uncertain terrain, an approach that excites and surprises in equal turn. . . . Smith, always one to take risks, sees all of them pay off yet again.” —Publishers Weekly (starred review)

“At the heart of Man Booker Prize nominee Smith’s new novel is the charming friendship between a lonely girl and a kind older man who offers her a world of culture. This novel of big ideas and small pleasures is enthusiastically recommended.” —Library Journal (starred review)

“A girl's friendship with an older neighbor stands at the center of this multifaceted meditation on aging, art, love, and affection. . . . Smith has a gift for drawing a reader into whatever world she creates. . . . [Autumn is] compelling in its emotional and historical freight, its humor, and keen sense of creativity and loss.” —Kirkus Reviews (starred)