Paris by the Book: A Novel (Paperback) 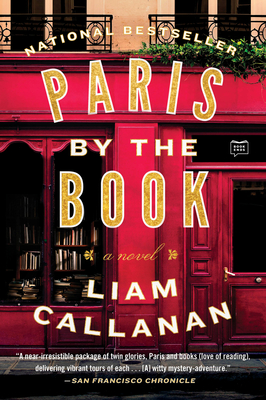 Paris by the Book: A Novel (Paperback)

“In Paris, there is a bookstore called The Late Edition, where books are shelved geographically, and while readers can find any book by its story's setting, the store's proprietor Leah cannot locate her missing husband and searches for him throughout the city. In Paris by the Book, Paris is equal parts Madeline and The Red Balloon, the children's books that shape Leah's view of the City of Light. I'd compare Callanan's engrossing third novel to The Storied Life of A.J. Fikry and The Little Paris Bookshop, but with its confounding but ultimately loveable heroine, there's a bit of Where'd You Go, Bernadette in the story as well. This captivating novel is filled with rich characters, a twisty plot, a bit of mystery, and a heaping dollop of joie de vivre.”
— Daniel Goldin, Boswell Book Company, Milwaukee, WI

“Fans of Ludwig Bemelman’s Madeline series will relish visiting the magical city with Leah Eady, half of a couple brought together in Milwaukee by their shared love of French children’s books. When Robert, a novelist, vanishes, Leah takes her girls to Paris hoping to find him via an unfinished manuscript he’s left behind. Her journey leads her to an English-language bookstore, and, with nothing to lose, Leah says, ‘Mais, oui!’ and buys the floundering business. The store becomes a portal for her and the girls to delve deeper into the city, French classics, and the mystery of the missing Robert. An enchanting read from the author of The Cloud Atlas.”
— Barbara Peters, The Poisoned Pen Bookstore, Scottsdale, AZ

A missing person, a grieving family, a curious clue: a half-finished manuscript set in Paris

When eccentric novelist Robert Eady abruptly vanishes, he leaves behind his wife, Leah, their daughters, and, hidden in an unexpected spot, plane tickets to Paris.

Hoping to uncover clues--and her husband--Leah sets off for France with her girls. Upon their arrival, she discovers an unfinished manuscript, one Robert had been writing without her knowledge . . . and that he had set in Paris. The Eady girls follow the path of the manuscript to a small, floundering English-language bookstore whose weary proprietor is eager to sell. Leah finds herself accepting the offer on the spot.

As the family settles into their new Parisian life, they trace the literary paths of some beloved Parisian classics, including Madeline and The Red Balloon, hoping more clues arise. But a series of startling discoveries forces Leah to consider that she may not be ready for what solving this mystery might do to her family--and the Paris she thought she knew.

Charming, haunting, and triumphant, Paris by the Book follows one woman's journey as she writes her own story, exploring the power of family and the magic that hides within the pages of a book.
Liam Callanan is a novelist, teacher and journalist. His novel, Paris by the Book, a national bestseller, was translated into multiple languages and won the 2019 Edna Ferber Prize. He’s also the 2017 winner of the Hunt Prize, and his first novel, The Cloud Atlas, was a finalist for an Edgar Award. Liam’s work has appeared in The Wall Street Journal, Slate, The New York Times, The Washington Post and The San Francisco Chronicle, and he's recorded numerous essays for public radio. He's also taught for the Warren Wilson MFA Program for Writers, Bread Loaf Writers’ Conference, and the University of Wisconsin–Milwaukee, and lives in Wisconsin with his wife and daughters.
“Sublime . . . Callanan has crafted a beautifully drawn portrait of a woman interrupted, set among the exquisite magic of Paris, where life frequently imitates art as the ghosts of the past linger just out of sight.”
—Publisher's Weekly (starred review)

“Callanan has woven a tale of grief, resentment, and the everyday madness of equivocating the unfathomable. . . . Callanan’s sweet and compulsively readable tale invites readers to fall in love with Paris, Leah, and her family.”
—Booklist

“A love letter to reading, writing, and all things French, Paris by the Book combines a charming first-person protagonist, a nuanced family drama, and the magic of Paris.”
—ShelfAwareness (starred review)

“Both playful and serious . . . Liam Callanan's new novel has two ingredients that make booksellers and readers swoon: Paris and bookstores . . . a must for fans of The Red Balloon and the Madeline stories.”
—Milwaukee Journal-Sentinel

“Paris by the Book is inherently addicting, thrilling, and literary in more ways than one.”
—Michigan Daily

“Liam Callanan’s Paris by the Book is much more than an elegiac portrait of an artist who has vanished. Here we witness the sacrifices and yearnings of the ones left behind as they continue to love, live, and flourish. Like James Salter’s Light Years, Callanan depicts the once seemingly simple conditions of a young marriage and what it takes to let such conditions go.”
—Min Jin Lee, National Book Award finalist author of Pachinko

“This charming and poignant novel made me fall in love with Paris and all things French. Oh, to own a bookstore in any arrondissement! Within this love story there are reflections on the mystery of writing, the solace of reading, the ties that bind and those that don’t, plus the joy of The Red Balloon, to name but a few of the pleasures of Paris by the Book.”
—Jane Hamilton, author of The Excellent Lombards and A Map of the World

“In Paris by the Book, the marvelously gifted Liam Callanan tells a spellbinding story of reading and writing, romance and marriage, French frozen food and a small bookshop. I loved walking the streets of Marais with his eloquent narrator. And I loved how Callanan simultaneously reveals the history of her marriage and of her adopted city. Open a bottle of wine, open this wise and wonderful book, and enjoy.”
—Margot Livesey, author of Mercury and The Flight of Gemma Hardy

“A haunting literary mystery and a multifaceted love story of husbands gone missing, of daughters left behind, of starting over, of books, and finally, of Paris. I love, love this novel.”
—Caroline Leavitt, author of Cruel Beautiful World

“Liam Callanan's new novel is charming and full of fabled accordion music and wonderfully Márquezian magic--and best of all it's told by a narrator I came to love, whose funny, honest, wryly snarky voice drew me in from the first line.”
—Dan Chaon, author of Ill Will