The Elephant Whisperer: My Life with the Herd in the African Wild (Paperback) 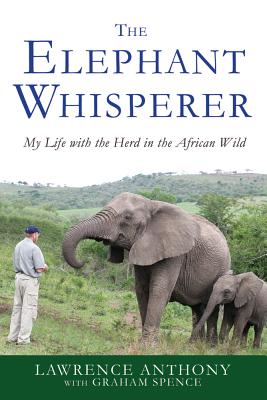 The Elephant Whisperer: My Life with the Herd in the African Wild (Paperback)

Lawrence Anthony devoted his life to animal conservation, protecting the world's endangered species. Then he was asked to accept a herd of "rogue" wild elephants on his Thula Thula game reserve in Zululand. His common sense told him to refuse, but he was the herd's last chance of survival: they would be killed if he wouldn't take them.

In order to save their lives, Anthony took them in. In the years that followed he became a part of their family. And as he battled to create a bond with the elephants, he came to realize that they had a great deal to teach him about life, loyalty, and freedom.

The Elephant Whisperer is a heartwarming, exciting, funny, and sometimes sad memoir of Anthony's experiences with these huge yet sympathetic creatures. Set against the background of life on an African game reserve, with unforgettable characters and exotic wildlife, Anthony's unrelenting efforts at animal protection and his remarkable connection with nature will inspire animal lovers and adventurous souls everywhere.

Lawrence Anthony (1950-2012) founded the Thula Thula wildlife reserve in Zululand, South Africa; launched The Lawrence Anthony Foundation; and received the UN's Earth Day award for his efforts to save the animals of the Baghdad Zoo. With Graham Spence, he is the author of Babylon's Ark: The Incredible Wartime Rescue of the Baghdad Zoo, The Elephant Whisperer: My Life with the Herd in the African Wild, and The Last Rhinos: My Battle to Save One of the World's Greatest Creatures.

GRAHAM SPENCE is a journalist and editor. Originally from South Africa, he lives in England. Together he and Lawrence Anthony wrote Babylon's Ark: the Incredible Wartime Rescue of the Baghdad Zoo.

“Anthony has made a difference in the lives of many magnificent animals who otherwise would have been lost to the world. When you're feeling down and out and defeated and ready to give up, read this inspiring book and share it widely with others.” —Marc Bekoff, author of The Emotional Lives of Animals

“In my thirty-five years of studying man/animal communication I have met only a few individuals who have the ability to enter into the metaphysical realm of the exotic animal. Lawrence Anthony has been there and back. His wonderfully written book The Elephant Whisperer is a true reflection of his ability to be one of the pachyderms.” —Ralph Helfer, author of Modoc

“A lovingly written tale of close encounters, some beautiful and some frightening, with humans and nonhumans alike. Anthony's story of his trials and tribulations in preserving a herd of African elephants is a parable for the continent.” —Irene M. Pepperberg, author of Alex & Me

“An engaging and vividly personal account, The Elephant Whisperer invites you in, as confidant and confederate, from the first page and holds you rapt to the very last. A compelling reminder of the power and mysteries of the natural world, Thula Thula's elephants are lucky to have a friend like Lawrence Anthony.” —Amelia Thomas, author of The Zoo on the Road to Nablus

“The Elephant Whisperer is every bit as much a page-turner as a novel. … Anyone who remembers Born Free, a personal story of tamed East African lions, will hope this book, too, is destined for the screen.” —San Francisco Book Review