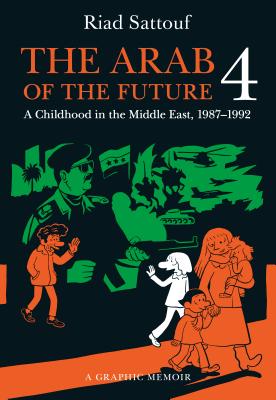 The penultimate installment in the bestselling French graphic memoir series—hailed as “exquisitely illustrated” and “irresistible”—covering the years of Riad Sattouf’s adolescence, from 1987-1992.

In the fourth volume of The Arab of the Future, little Riad has grown into a teenager. In the previous books, his childhood was complicated by the pull of his two cultures—French and Syrian—and his parents’ deteriorating relationship. Now his father, Adbel-Razak, has left to take a job in Saudi Arabia, and after making a pilgrimage to Mecca, turns increasingly towards religion. But after following him from place to place and living for years under the harsh conditions of his impoverished village, Riad’s mother Clementine has had enough. Refusing to live in a country where women have no rights, she returns with her children to live in France with her own mother… until Abdel-Razak shows up unexpectedly to drag the family on yet another journey.

As the series builds to a climax, we see Riad struggle with problems both universal (bullies at school) and specific (his mother’s sudden illness, the judgment of his religious relatives). And as Abdel-Razak returns again to the same fantastical dreams he pursued in previous books, we see him become more and more unhinged, until ultimately he crosses the line from idealism to fanaticism, leading to a dramatic breaking point.

Full of the same gripping storytelling and lush visual style for which Sattouf’s previous works have won numerous awards, The Arab of the Future 4 continues the saga of the Sattouf family and their peripatetic life in France and the Middle East.

Riad Sattouf is a best-selling cartoonist and filmmaker who grew up in Syria and Libya and now lives in Paris. The author of four comics series in France and a former contributor to the satirical publication Charlie Hebdo, Sattouf is now a weekly columnist for l’Obs. He also directed the films The French Kissers and Jacky in the Women’s Kingdom.

"Brilliant, sensational and heartbreaking, The Arab of the Future 4 hits all the high and low notes without skipping a beat, setting up a thrilling conclusion to the series."
—Comics Beat

"Struck through with moments of terrible violence and subtle revelation, The Arab of the Future will be regarded as a vital text for future generations eager to understand the vastly complex and often brutal landscape of the Middle East at the close of the 20th century."
—Shelf Awareness

Praise for The Arab of the Future:

"I tore through two volumes of 'The Arab of the Future,' by Riad Sattouf—it’s the most enjoyable graphic novel I’ve read in a while. "
—Zadie Smith, The New York Times Book Review

“A deft and devastating graphic memoir . . . both sensitive and biting . . . Along the way, we get a fine-grained, first-person account of the brutality of Syria under Hafez al-Assad and Libya under Muammar Qaddafi.”
—New York Review of Books

“Exquisitely illustrated, and filled with experiences of misfortune bordering on the farcical, Mr. Sattouf’s book is a disquieting yet essential read.”
—Carmela Ciuraru, The New York Times

“Darkly ironic . . . Sattouf’s father is the same immature, posturing figure familiar from volume 1—the family can only trail along in the mercurial patriarch’s wake. Under Sattouf’s pen, this state of affairs becomes an ingeniously apt microcosm of the larger world he grew up in.”
—NPR