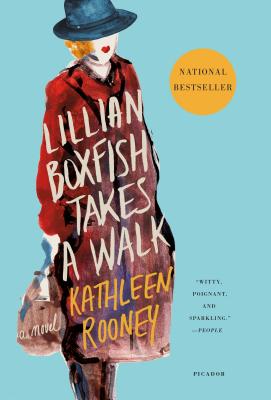 “Join 85-year-old Lillian on a New Year's Eve stroll through Manhattan, a city as changed by time as Lillian herself. As with Joyce's Ulysses, the reader is privy to a life told in snapshots of memory within a single day. Based loosely on the life of Margaret Fishback, Lillian is a former Depression-era advertising copywriter for R.H. Macy's and a poet of light verse. She is also a mother and an ex-wife. Rooney's work has a light touch, but she is never frivolous. Rooney has the capacity to portray depth within brevity, pain within humor. Here is a novel that both entertains and enlightens, a balance rarely achieved.”
— Sarah Sorensen (E), Bookbug, Kalamazoo, MI

A love letter to city life in all its guts and grandeur, Lillian Boxfish Takes a Walk by Kathleen Rooney paints a portrait of a remarkable woman across the canvas of a changing America: from the Jazz Age to the onset of the AIDS epidemic; the Great Depression to the birth of hip-hop.

“In my reckless and undiscouraged youth,” Lillian Boxfish writes, “I worked in a walnut-paneled office thirteen floors above West Thirty-Fifth Street…”

She took 1930s New York by storm, working her way up writing copy for R.H. Macy’s to become the highest paid advertising woman in the country. It was a job that, she says, “in some ways saved my life, and in other ways ruined it.”

Now it’s the last night of 1984 and Lillian, 85 years old but just as sharp and savvy as ever, is on her way to a party. It’s chilly enough out for her mink coat and Manhattan is grittier now—her son keeps warning her about a subway vigilante on the prowl—but the quick-tongued poetess has never been one to scare easily. On a walk that takes her over 10 miles around the city, she meets bartenders, bodega clerks, security guards, criminals, children, parents, and parents-to-be, while reviewing a life of excitement and adversity, passion and heartbreak, illuminating all the ways New York has changed—and has not.

Lillian figures she might as well take her time. For now, after all, the night is still young.

KATHLEEN ROONEY is a founding editor of Rose Metal Press and a founding member of Poems While You Wait. She has been recognized as one of Newcity Lit's "Lit 50: Who Really Books in Chicago 2018." Her previous work includes poetry, fiction, and nonfiction, and has appeared in The New York Times Magazine, Allure, Salon, The Rumpus, The Nation, the Poetry Foundation website, and the Chicago Tribune. Kathleen was named "Best Novelist" by the Chicago Reader in 2017. She is married to the novelist Martin Seay.

“Irresistible...funny and touching....This witty and heartfelt ode to a city, to its infinite variety, to its melting pot of citizens not only enchants but offers an important lesson: that human connections and work are what give life meaning.”
—Boston Globe

“I love this book....Just wonderful....A picture of a woman who tried and succeeded in making it in what was a man’s profession." —Nancy Pearl

“Extraordinary…hilarious…Elegantly written, Rooney creates a glorious paean to a distant literary life and time—and an unabashed celebration of human connections that bridge past and future.
—Publishers Weekly (starred and boxed)

“Effervescent…steeped in humanity and wit.”
—The Christian Science Monitor (10 Best Books of January)

"If you haven’t read Lillian Boxfish Takes a Walk, you’ll want to rectify that immediately. It is tart and charming and might make you miss your Nanna." —Jennifer Weiner, #1 New York Times bestselling author

“Enchanting….[Rooney] is clearly in her element here….Pre-Mad Men, [Lillian] combines the smarts of Peggy Olson, the sex appeal of Joan Holloway, and a hefty dose of independence that’s all her own.”
—FinancialTimes (UK)

"Past and present intermingle in Rooney’s novel, distinguished by a careful shift from past to present tense but always unified by Lillian’s unfailingly witty, reflective voice."
—BookReporter

“Well written, funny, and wise, Lillian Boxfish Takes A Walk is one of those novels that once again remind us of the power and value of fiction.” —Smoky Mountain News

"Rooney courts regret and vulnerability with humor, as only a poet could....Lillian's walk is for anyone who craves a forgotten past or strains to make sense of the future." —Edge Media

“Easily the best gadding-around-town novel since Dawn Powell and Dorothy Parker.”
—Daniel Handler, author of Why We Broke Up and We Are Pirates

"There is a little of Lillian Boxfish in all of us. And if there isn’t, there ought to be.”
—Julia Claiborne Johnson, author of Be Frank With Me

“If you are not charmed by Lillian Boxfish, then there may be no hope for you.”
­—Bookpage (Book of the Day)

“This walk will sweep listeners off their feet…seemingly effortless yet so compelling.”
—AudioFile Magazine (Earphones Award winner)