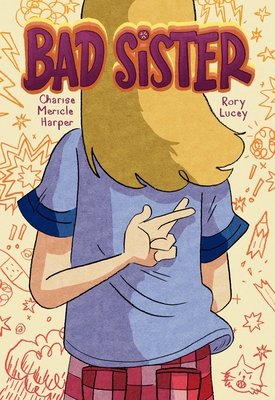 This middle grade graphic memoir by Charise Mericle Harper, featuring illustrations by Rory Lucey, follows a young girl who undergoes a crisis of conscience, realizing that she is a “bad sister.”

But she’s also a bad sister. When she goes too far and breaks little brother Daniel’s tooth, can she redeem herself? Is an accident really an accident if you could have stopped it?

But most importantly... What does it mean to be a good sister?

Charise Mericle Harper has written more than fifty books for children, not that she counted, but once when she was at school visit a kid put his hand up and said, “you wrote fifty-four books. I counted them on Amazon”. These books include chapter books, graphic novels, picture books and early readers, including the Crafty Cat, Fashion Kitty, and Just Grace series, and The Good For Nothing Button. Charise also wrote and illustrated the weekly comic strip Eye Spy. Charise is excited and slightly nervous to share Bad Sister with the world. It’s not easy to admit you were bad, even if now you are very, very good.

Rory Lucey is an illustrator and art teacher. Born in London and raised throughout the Midwest, he holds a B.F.A. in Printmaking and Drawing from Washington University and an M.A. in Teaching Art and Design from the Rhode Island School of Design. He is the author and illustrator of Jonesy: Nine Lives on the Nostromo and a contributor to Alien: 40 Years 40 Artists, both from Titan Books. He lives in New Jersey with his wife and two cats.

"Cathartic proof that childhood provides lessons for a lifetime and that change is possible." —Kirkus, starred review

"Harper makes it clear that despite the angst, Charise and Daniel have an unbreakable bond, and she deftly conveys the sibling dynamic: One minute the two are squabbling, the next they’re secretly finding a way to communicate through the walls after bedtime." —School Library Journal, starred review

"[...] The story takes a resonant dive into the insular world of children, especially siblings." —Publishers Weekly