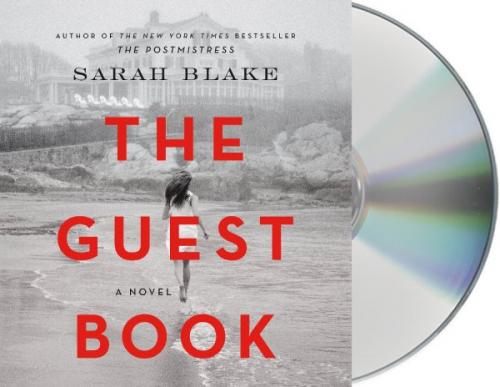 “I began The Guest Book expecting an excellent family saga set, in part, on an island in Maine. The magic of the family home is palpable as three generations build loyalty, identity, and memories there. But what I read was far, far more. This is a history of our country’s evolution through matters of race, class, and politics, and it relates compellingly to our current struggles with those topics as the characters grapple with the underpinnings of privilege, familial love, and morality. Sarah Blake has written a stunning and complex novel that lingers in your mind long after the last page.”
— Dana Brigham, Brookline Booksmith, Brookline, MA

“A cozy-chair, cup-of-tea, wrapped-in-a-blanket kind of novel, The Guest Book takes the reader through three generations. As you delve into the lives and personalities of the Milton family’s seemingly perfectly ordered and charmed world, the cracks gradually begin to show. Through the denial of the news in Nazi Germany, the taboo of speaking of one’s illness or someone’s homosexuality, or the hiding of a friend that is of a different skin color or religion, we see through the eyes of this family that history does repeat itself and lessons are hard learned. If you enjoyed The Postmistress, you will enjoy this. Lots of discussion for reading groups.”
— Nona Camuel, CoffeeTree Books, Morehead, KY

This program includes a bonus conversation with the author.

A lifetime of secrets. A history untold.

No. It is a simple word, uttered on a summer porch in 1936. And it will haunt Kitty Milton for the rest of her life. Kitty and her husband, Ogden, are both from families considered the backbone of the country. But this refusal will come to be Kitty’s defining moment, and its consequences will ripple through the Milton family for generations. For while they summer on their island in Maine, anchored as they are to the way things have always been, the winds of change are beginning to stir.

In 1959 New York City, two strangers enter the Miltons’ circle. One captures the attention of Kitty’s daughter, while the other makes each of them question what the family stands for. This new generation insists the times are changing. And in one night, everything does.

So much so that in the present day, the third generation of Miltons doesn’t have enough money to keep the island in Maine. Evie Milton’s mother has just died, and as Evie digs into her mother’s and grandparents’ history, what she finds is a story as unsettling as it is inescapable, the story that threatens the foundation of the Milton family myth.

Moving through three generations and back and forth in time, The Guest Book asks how we remember and what we choose to forget. It shows the untold secrets we inherit and pass on, unknowingly echoing our parents and grandparents. Sarah Blake’s triumphant novel tells the story of a family and a country that buries its past in quiet, until the present calls forth a reckoning.

“Sarah Blake is such a beautiful writer she can make any world shimmer." — Paula McLain, New York Times bestselling author of The Paris Wife and Love and Ruin

Sarah Blake is the author of the novels Grange House and the New York Times bestseller The Postmistress. She lives in Washington, D.C., with her husband and two sons.

Orlagh Cassidy is the winner of the 2009 Best Voice in Children & Family Listening and the 2008 and 2011 Best Voice in Mystery & Suspense. She’s narrated for Jacqueline Winspear, James Patterson, Erica Spindler, Beth Harbison, and Frank Herbert, among others.

Cassidy’s Broadway credits include Present Laughter with Frank Langella, Our Country's Good, and Suddenly Last Summer.  She has appeared Off-Broadway in Bright Ideas and The Field at The Irish Rep (Drama Desk Nomination). She was "Doris Wolfe" on The Guiding Light and her other television appearances include Sex and the City, Law & Order, Law and Order SVU, and Elementary.  She also appeared in the films Purple Violets, Young Adult, and Definitely, Maybe.