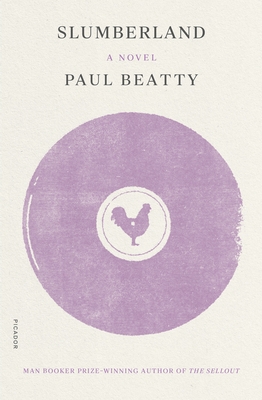 The hip break-out novel from 2016 Man Booker Prize winning author, Paul Beatty, about a disaffected Los Angeles DJ who travels to post-Wall Berlin in search of his transatlantic doppelganger.

Hailed by the New York Times and the Los Angeles Times as one of the best writers of his generation, Paul Beatty turns his creative eye to man's search for meaning and identity in an increasingly chaotic world.

After creating the perfect beat, DJ Darky goes in search of Charles Stone, a little know avant-garde jazzman, to play over his sonic masterpiece. His quest brings him to a recently unified Berlin, where he stumbles through the city's dreamy streets ruminating about race, sex, love, Teutonic gods, the prevent defense, and Wynton Marsalis in search of his artistic-and spiritual-other.

Ferocious, bombastic, and laugh-out-loud funny, Slumberland is vintage Paul Beatty and belongs on the shelf next to Jonathan Lethem, Colson Whitehead, and Junot Diaz.

Paul Beatty is the author of the novels, Tuff, Slumberland and The White Boy Shuffle, and the poetry collections Big Bank Take Little Bank and Joker, Joker, Deuce. He was the editor of Hokum: An Anthology of African-American Humor. In 2016, he became the first American to win the Man Booker Prize for his novel The Sellout. In 2017, he was the winner the American Academy of Arts and Letters Literature Award. He lives in New York City.

“What Gore Vidal did for sex and gender constructs, Beatty does for race and prominent black Americans, with sacred cow-tipping on nearly every page. Waterfalls of wordplay that pool and merge like acid jazz on the page.” —Washington Post

“A remarkably strange and funny meditation…revelatory and mind-blowing.” —Seattle Times