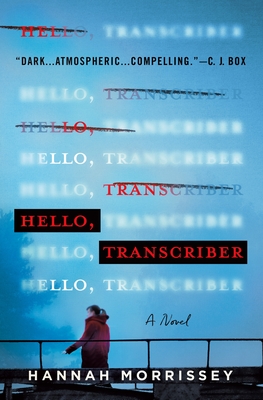 Hannah Morrissey's Hello, Transcriber is a captivating mystery suspense debut featuring a female police transcriber who goes beyond the limits to solve a harrowing case.


Every night, while the street lamps shed the only light on Wisconsin’s most crime-ridden city, police transcriber Hazel Greenlee listens as detectives divulge Black Harbor’s gruesome secrets. An aspiring novelist, Hazel believes that writing a book could be her only ticket out of this frozen hellscape, but her life isn’t exactly brimming with inspiration. Until her neighbor confesses to hiding the corpse of an overdose victim.

With an insider’s look at the investigation, Hazel becomes spellbound by the lead detective, Nikolai Kole, and the chilling narrative he shares with her. Through his transcription, she learns that the suspicious death is linked to Candy Man—a drug dealer notorious for selling illegal substances to children—and when Kole invites her on a covert operation to help take the dealer down, the promise of a story calls to her. As the investigation unfolds, Hazel will discover just how far she will go for her story, even if it means destroying her marriage, her career, and any chance she has of getting out of Black Harbor alive. Because if she’s learned one relentless truth about this place, it’s the fact that everybody lies.

HANNAH MORRISSEY earned her Bachelor of Arts degree from the University of Wisconsin - Madison. She grew up on a farm in a small northern town and now lives near Milwaukee with her husband and two pugs. Hello, Transcriber is her debut novel, inspired by her work as a police transcriber.

"With its fine-tuned bleakness and unflinching exploration of human depravity, Hello, Transcriber is a shudder-inducing series kickoff." —BookPage

"Hello, Transcriber is a dark, atmospheric, and compelling debut by a unique talent. I was sucked in immediately and could think of little else until the last page.” —C.J. Box, #1 New York Times bestselling author of Long Range

"An edgy and haunting crime novel with a complex and world-weary heroine at the center. Hannah Morrissey writes with passion, razor-edged prose, and most importantly, authenticity. A former police transcriber herself, she knows the cops and criminals and those who bridge the worlds between. No doubt destined to become one of this year's best debuts." —Ace Atkins, New York Times bestselling author of The Revelators and Robert B. Parker's Someone to Watch Over Me

"As poetic as it is suspenseful, Hello, Transcriber delivers a refreshing slant on the police procedural. With evocative prose, intriguing and layered characters, and a setting so vivid it infiltrated my dreams, Hannah Morrissey establishes herself as an exciting new voice in literary suspense." —Megan Collins, author of The Winter Sister and Behind the Red Door

"Morrissey is a psychologically attentive writer who captures the bristly tension between longtime locals and newcomers." - Shelf Awareness

"[An] atmospheric suspense debut [with an] intriguing premise." - Kirkus Reviews

“Hello, Transcriber is a perfect bridge between more traditional procedural-focused crime fiction and psychological suspense, all wrapped up in a dark, gritty atmosphere.” - Crime by the Book

"[A] solid debut...This mystery largely succeeds thanks to its strong sense of place and realistically flawed heroine. Hazel’s thorny relationships provide regular infusions of tension that catapult the tale to a dramatic close. Morrissey is off to a promising start." - Publishers Weekly