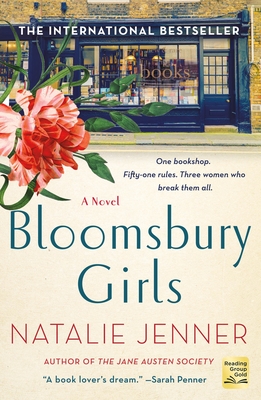 “A satisfying read about three ladies in a London bookshop in 1950. Through friendship, acuity, and boldness, they triumphantly break through the restrictive roles of womanhood to take control of their own futures and happiness!”
— Annette Steinmetz, The Well-Read Moose, Coeur d'Alene, ID

"Delightful." --People, Pick of the Week

*Named a Most Anticipated Book of 2022 by Katie Couric Media, the CBC, the Globe and Mail, BookBub, POPSUGAR, SheReads, Women.com and more!*

Natalie Jenner, the internationally bestselling author of The Jane Austen Society, returns with a compelling and heartwarming story of post-war London, a century-old bookstore, and three women determined to find their way in a fast-changing world in Bloomsbury Girls.

Bloomsbury Books is an old-fashioned new and rare book store that has persisted and resisted change for a hundred years, run by men and guided by the general manager's unbreakable fifty-one rules. But in 1950, the world is changing, especially the world of books and publishing, and at Bloomsbury Books, the girls in the shop have plans:

Vivien Lowry: Single since her aristocratic fiance was killed in action during World War II, the brilliant and stylish Vivien has a long list of grievances--most of them well justified and the biggest of which is Alec McDonough, the Head of Fiction.

Grace Perkins: Married with two sons, she's been working to support the family following her husband's breakdown in the aftermath of the war. Torn between duty to her family and dreams of her own.

Evie Stone: In the first class of female students from Cambridge permitted to earn a degree, Evie was denied an academic position in favor of her less accomplished male rival. Now she's working at Bloomsbury Books while she plans to remake her own future.

As they interact with various literary figures of the time--Daphne Du Maurier, Ellen Doubleday, Sonia Blair (widow of George Orwell), Samuel Beckett, Peggy Guggenheim, and others--these three women with their complex web of relationships, goals and dreams are all working to plot out a future that is richer and more rewarding than anything society will allow.

NATALIE JENNER is the author of the instant international bestseller The Jane Austen Society and Bloomsbury Girls. A Goodreads Choice Award runner-up for historical fiction and finalist for best debut novel, The Jane Austen Society was a USA Today and #1 national bestseller, and has been sold for translation in twenty countries. Born in England and raised in Canada, Natalie has been a corporate lawyer, career coach and, most recently, an independent bookstore owner in Oakville, Ontario, where she lives with her family and two rescue dogs. Visit her website to learn more.

"A feel-good literary confection that will have you grinning in solidarity with these girls who dare to follow their dreams." --Toronto Star

"An illuminating yarn... Fans of emotional historical fiction will be charmed." --Publishers Weekly

"Bloomsbury Girls is an immersive tale of three women determined to forge their own paths in 1950s London. Jenner has proven to be a master at spinning charming, earnest characters and paints a vivid picture of postwar England. I wanted to stay lost in her world forever!" --Stephanie Wrobel, internationally bestselling author of Darling Rose Gold

"Bloomsbury Girls is a book lover's dream, one of those rare reads that elicits a sense of book-ish wistfulness and nostalgia. Jenner has created a colorful cast of characters in a story about friendship, perseverance, and the ways that determined women can band together in a man's world. You're in for a treat." --Sarah Penner, New York Times bestselling author of The Lost Apothecary

"In a London still reeling from the ravages of World War II and the changes war has brought to English society, three young women take their futures into their own hands. With Bloomsbury Girls, Natalie Jenner has penned a timely and beautiful ode to ambition, friendship, bookshops, and the written word." --Janet Skeslien Charles, New York Times bestselling author of The Paris Library