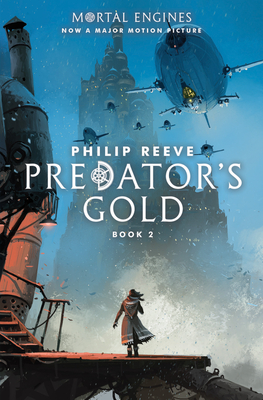 This is book number 2 in the Mortal Engines series.

Mortal Engines is now a major motion picture produced by Peter Jackson!
* "Reeve's [Mortal Engines] remains a landmark of visionary imagination." -- School Library Journal, starred review
"A breathtaking work of imagination, Hester Shaw is a heroine for the ages. The moment we finished reading [Mortal Engines] we knew we wanted to make it into a movie." -- Producer Peter Jackson
Philip Reeve's epic city-eat-city adventure series continues with Mortal Engines Book 2: Predator's Gold.
With the great Traction City of London completely destroyed, Tom Natsworthy and Hester Shaw travel across the world, trading with other airships and adventuring on the exciting and exotic routes of the Bird Roads. When their little scrapyard aircraft is pursued by rocket-firing gunships, the ice city of Anchorage offers them sanctuary. But as Tom and Hester soon discover, it is no safe refuge. Devastated by plague in recent years and haunted by ghosts and madness, Anchorage is headed for the Dead Continent of North America. It's a perilous course, one that will take them directly into a firestorm of danger and conflict.
Mortal Engines is now a major motion picture produced by Peter Jackson!

Philip Reeve is the bestselling author of the Mortal Engines quartet, which is now a major motion picture, and the award-winning Fever Crumb series. His other books include the highly acclaimed iHere Lies Arthur/i and iNo Such Thing As Dragons/i. He lives in England with his wife and son. Visit him online at philip-reeve.com.