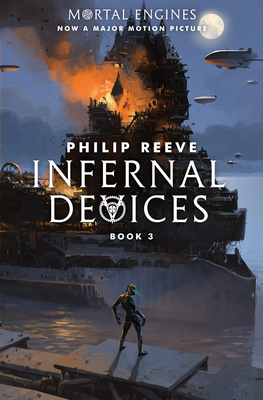 By Philip Reeve
$9.99
On Our Shelves Now

This is book number 3 in the Mortal Engines series.

Mortal Engines is now a major motion picture produced by Peter Jackson!
* "Reeve's [Mortal Engines] remains a landmark of visionary imagination." -- School Library Journal, starred review
"A breathtaking work of imagination, Hester Shaw is a heroine for the ages. The moment we finished reading [Mortal Engines] we knew we wanted to make it into a movie." -- Producer Peter Jackson
Philip Reeve's epic city-eat-city adventure series continues with Mortal Engines Book 3: Infernal Devices.
The mighty engines of Anchorage have been rusted and dead for years. The derelict city no longer roams the Ice Wastes, but has settled on the edge of the land that was once America. Tom Natsworthy and Hester Shaw are happy in the safety of a static settlement, but their daughter, Wren, is desperate for adventure. When a dangerously charming submarine pirate offers her a chance to escape, Wren doesn't think twice about leaving her home and her parents behind. But the pirate wants something in return -- Wren must steal the mysterious Tin Book. To do so will ignite a conflict that could tear the whole world apart.
Mortal Engines is now a major motion picture produced by Peter Jackson!

Philip Reeve is the bestselling author of the Mortal Engines quartet, which is now a major motion picture, and the award-winning Fever Crumb series. His other books include the highly acclaimed iHere Lies Arthur/i and iNo Such Thing As Dragons/i. He lives in England with his wife and son. Visit him online at philip-reeve.com.